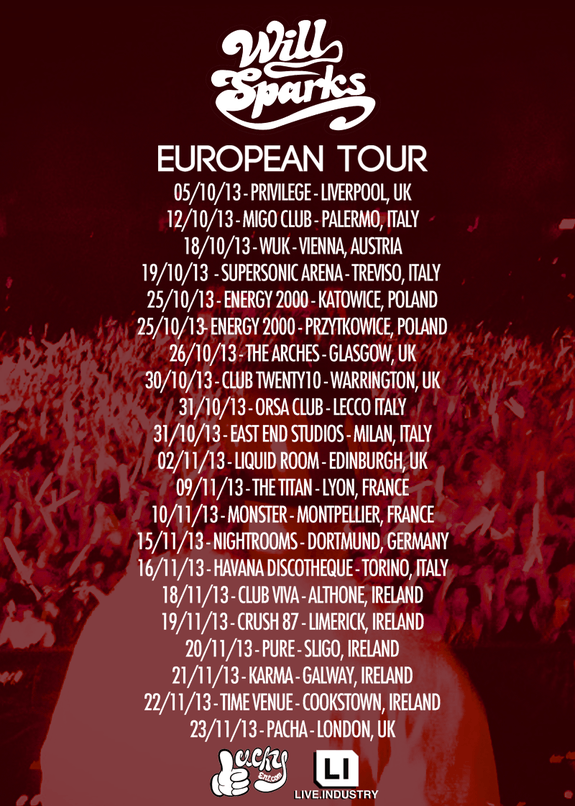 In the midst of an outrageously successful debut North American tour, 20-year old Australian talent, Will Sparks has today announced that he’ll be heading to Europe this autumn for the very first time!

Renowned for his uplifting and bouncy beats, Sparks has accumulated a legion of followers with his unique take on electronic music, proven by him accumulating over 100,000 SoundCloud followers in a matter of months with his non-stop stream of original productions.

After a string of hits with ‘Ah Yeah’ and ‘The Viking’, 2013 got even bigger for Sparks as he transformed Robin Thicke’s ‘Blurred Lines’ into a monster club hit, which reached #2 in the Beatport chart and remained in the Top 5 for over a month after release.

Taking the roof off venues such as Pacha and Avalon became a nightly occurrence throughout the tour, and it’s now Europe’s turn to witness Sparks bring his high-octane, energetic and downright ‘Crazy’ sets to the continent, with Italy, Austria, Poland, France, Germany and the UK all on the hit-list of inthemix’s ‘Breakthrough Artist of 2013’.

The budding producer finished his North America tour on a high as he played the first ever edition of TomorrowWorld in Atlanta, where he performed on the ‘Super You & Me’ stage alongside some of the most established producers in the game such as Benny Benassi and Laidback Luke. With a wealth of new material on the way including a collaboration with Laidback Luke himself, European fans are set to be in for a treat this coming autumn.

Catch Will Sparks at the following dates: