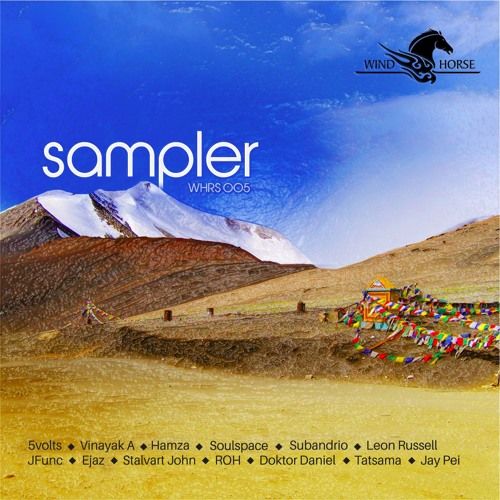 India’s Wind Horse Records has unveiled its latest artist compilation focusing on the emerging talent that orbits around the label’s sphere. Internationally recognized as a tastemaker of sophisticated deep house styles, often with an exotic worldly twist, Wind Horse and its samplers are often looked to for the discovery of exciting new producers by DJs and punters alike. This latest collection will be no exception as eleven high quality tracks are presented, showcasing the dynamic, well-produced electronic sound that this ambitious label excels at.

Contributions from familiar names from previous Wind Horse releases – such as Soulspace, Vinayak^A, Stalvart John, JFunc, Hamza, and 5volts – confidently sit alongside tracks by newer additions to the roster. Jay Pei, Leon Russell, Doktor Daniel, EJAZ, Subandrio, and Tatsama all give shimmering contributions that provide their introductions to followers of the label.

The swirling deep house of Jay Pei’s “Michigan” and Tatsama’s “June Bug” accompany techier entries like 5Volts’ expansive “Cemani” and EJAZ & Subandrio’s “Before the Storm”, showing the breadth of the sampler. New tracks by recurring Wind Horse artists – such as Hamza’s spacey and thumping “Indigo Activation” and Stalwart John’s hypnotic “It’s Just A Matter Of Time” – join gems from the catalog that may have been overlooked. Vinayak^A’s “Pleading To Be Forgiven” and the ROH remix of Soulspace’s “C’est La Vie” are two past Wind Horse highlights that certainly deserve a second listen. Glasgow’s JFunc appears as one of the only non-Indian producers on the compilation with the lush and flowing “Ek Sien n’ Ses”. Doktor Daniel’s funky “Prime” and Leon Russell’s tough “Reform” round out the sampler … two more cool cuts from seasoned Indian DJs, now ready to infiltrate the world.

With five samplers now under its belt and a wealth of promising music-makers within its family, Wind Horse Records continues the path of being a consistent source of deep house discoveries. Stay tuned to this refreshing New Delhi-based imprint to hear the sonic treasures it has yet to uncover.