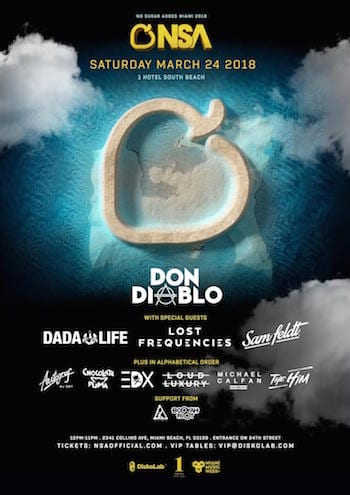 Esteemed Miami venue, the 1 Hotel South Beach, has announced the eagerly anticipated line-up for the highly in-demand ‘No Sugar Added’ event at the upcoming Miami Music Week. Partner with Diskolab for the upcoming event; the No Sugar Added line-up is spearheaded by Hexagon founder Don Diablo, with a further glittering cast in attendance.

The Dutchman, who has racked up hundreds of millions of streams across his flurry of releases, including recent debut studio album ‘FUTURE’, is one of dance music’s biggest names right now, surging into number #11 in the recent DJ Mag Top 100 list. He’ll be joined at the event by an all-star billing, which includes legendary producers Dada Life, Lost Frequencies, and tropical house pioneer, Sam Feldt.

With the likes of EDX, Autograf, Chocolate Puma, Michael Calfan, The Him, and Loud Luxury also in attendance at the Saturday party, ‘No Sugar Added’ serves as the jewel in the crown of the annual celebration of electronic music set to take place across the city during the build-up to Ultra Music Festival.

As one of the world's leading electronic dance music events, Miami Music Week (MMW) is now in its eight year, with over 1,200+ artists performing at 300+ events, hosted at 85+ venues during the 2017 edition.

Having first started at Nikki Beach Miami full of fun music and beach party vibes, a dedicated fan base look forward to NSA’s MMW event each year. With 2018 marking No Sugar Added’s biggest line-up of all time, the event will switch locations to a gigantic singular stage amid the luxury setting of the 1 Hotel for what promises to be the biggest NSA event yet.

Promising to serve as the hub of MMW’s most in-demand activity, the 1 Hotel South Beach boasts 425 guest rooms including 168 studio suites and one 3,500 square-foot oceanfront presidential suite. Guest rooms at the hotel average 700-square-feet, the largest in all of South Beach.