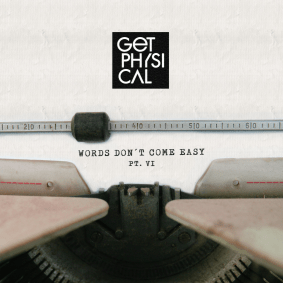 Get Physical’s annual Words Don’t Come Easy compilation clocks up a super sixth instalment this July. At the time of release, 10 of the 16 tracks will be exclusive and once again the whole thing shows this label continues to innovate more than 16 years after forming.

As with its predecessors, the album showcases a more vocal-driven electronic pop sound. It comes from a selection of names fans of the label will know, as well as a few surprises, from Sebastian Ledher to Paris Green, Emanuel Satie to WhoMadeWho, and each one offers something truly lasting.

It is South African Thor Rixon who kicks off this most coherent of compilations with ‘He Held Him Close’ featuring Roxy Caroline, the first track to be heard from his forthcoming album ‘Michele’. It’s a brooding cut with expansive synths echoing behind the icy vocals as drums roll slowly below. The tenderness and musicality continues on WhoMadeWho’s aching ‘Ember’ with its 80s vibes, and ZOSIA’s deep and dubby lullaby ‘Fading In’. Roderic Feat. Liah Alonso then offer the filtered and dream-like vocals of ‘Is This On?’, a harmonious electronic pop cut that makes your hips swing, and Sebastian Leger serves up another classic that’s rich in xylophones, colourful pads and hypnotic percussion while Paris Green plays with broken drum patterns and mellifluous melodies to rousing effect on ‘Feelin.’’

This is brilliantly mature and musical collection of memorable tracks that work as well at home or in headphones as they will on more sensitive dance floors.