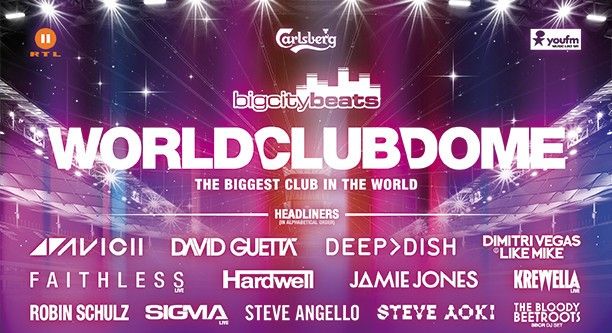 For one long weekend covering the 5th, 6th and 7th June 2015 BigCityBeats is set to build “the biggest club in the world” – the BigCityBeats WORLD CLUB DOME – right in the heart of Europe: a ½-million-m² monument to music in one of the continent’s coolest big cities!

A mixed-genre bag of emotions and music is set to tear down the walls around the electronic music community and get thousands of hearts beating as one. The BigCityBeats WORLD CLUB DOME is putting this global idea into practice with a record-breaking line-up of artists:

This is the first time that the BigCityBeats WORLD CLUB DOME will extend over three days. Two of the biggest DJs on the planet, AVICII and DAVID GUETTA, will respectively provide the opening and closing acts of the festival.

And alongside the opening set by AVICII the BigCityBeats WORLD CLUB DOME is announcing another fantastic highlight for its grand opening ceremony. The arena will reverberate to the sound of “I Can’t Get No Sleep” when FAITHLESS launch their new tour in front of a crowd of 40,000. In the run-up to the band’s first appearance since getting back together, BigCityBeats WORLD CLUB DOME said “We’re very proud that FAITHLESS have chosen the biggest club in the world as the venue in which to kick off their latest tour.”

With its Space Ibiza Stage the BigCityBeats WORLD CLUB DOME is presenting another spectacular foreign first: inviting the best club in the world to set up in the biggest club in the world! Featuring a raft of artists that have never performed sets together before in Germany, the 5,000-m² Space Ibiza Area will be a major focus of attention.

Another highlight for all deep house fans will be the Tonspiel tent, where Germany’s bright new international star Robin Schulz and his label will serve up the crème de la crème of deep house music.

Fans seeking an exclusive setting from which to enjoy the spectacle can head for the biggest ever VIP terrace in clubbing history, taking the lift from the car park straight up to the deluxe VIP area, which features its own dance floor and is perched directly above the main floor and the heaving 40,000-strong multitude!

The Club Music Circle areas located on the fringe of the arena will reflect every facet of electronic music. What club has ever offered 12 separate floors? 150 DJs and live acts will be pumping up the biggest club in the world from 5th to 7th June 2015, flanked by a flurry of acrobats, performers and dancers, packing the stages, floors and firmament with breathtaking action on all three days of the festival. And to round off each day a firework and laser extravaganza will light up the night sky above the Commerzbank Arena.

Tickets for the BigCityBeats WORLD CLUB DOME are on sale now!

In 2015 the BigCityBeats WORLD CLUB DOME will be held for the third time in one of the coolest metropolises in Germany, right in the heart of Europe. For a single weekend BigCityBeats will transform the ½-million-m² Commerzbank Arena in Frankfurt into the “biggest club in the world”. For three days in June more than 150 acts featuring a Who’s Who of the global electronic music scene will sprawl across 12 floors and the surrounding area, turning Frankfurt into the epicentre of club music. During the WORLD CLUB DOME event in 2014 over 30,000 fans per day made a runaway success of the first festival of the season. In 2015, too, the stage is set for acrobats, dancers, fireworks and laser shows to light up the sky over the Commerzbank Arena.