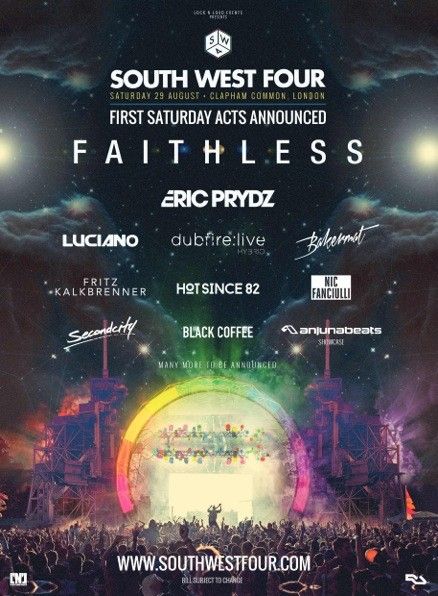 Returning to our spiritual home of Clapham Common on Saturday 29th and Sunday 30th August, South West Four 2015 will bring you a lineup featuring the biggest, best and most respected names in electronic music.

For the very first time SW4 will showcase ten incredible stages across the Bank Holiday Weekend, including the debut of our second main stage, the biggest indoor structure ever erected on Clapham Common. And with two main stages set to welcome your favourite headline DJs and live electronic acts, our lineup will hit the three figure mark for the first time, as we welcome over one hundred artists to the Capital.

The message here is simple; Twelve years in and South West Four continues to push the envelope. As we move into a new era in the development of the event we’re in no mood to hold back. SW4 2015 will be our most ambitious instalment to date and look to top last year’s weekend which was widely regarded as our best ever, resulting in us winning the coveted ‘Best British Festival’ award at the DJ Magazine awards. This is South West Four 2015…

“This summer we play South London’s SW4, the only festival date in the city where it all began for us. It’ll be a very special homecoming show, see you there!” Sister Bliss

It’s not every day that one of the world’s greatest electronic live acts decides to reunite in celebration of their 20th Anniversary. However the recent news that the legendary Faithless will come together one more time has sent shockwaves through the music industry and been met with a rapturous response. The fact that this will take place at South West Four makes this, without question, the most anticipated booking in our history. Thousands of fans from all over the world will make the pilgrimage to Clapham Common to witness this exclusive homecoming performance, set to be one of the highlights of the British summer. With an unparalleled back catalogue spread across seven albums (two of which went #1), numerous top 10 singles such as ‘Insomnia’, ‘God is a DJ’ and ‘We Come One’, as well as over fifteen million records sold worldwide, it’s no wonder why Faithless are considered dance music royalty. With a headline slot at South West Four on Saturday 29th August beckoning, Faithless are back to prove precisely why. Special ain’t the word…

Many artists have become synonymous with South West Four over the years. However one act more than any other stands tall as ‘Mr SW4’. That man is Eric Prydz. From naming one of his finest productions after the festival, to delivering performances that are consistently regarded amongst the weekend’s greatest highlights, Eric is the SW4 favourite. Returning this August for the sixth time in seven years, his main stage set alongside Faithless will again illustrate his pedigree, as will his new artist album which is set to take the airwaves by storm this summer. We cannot wait…

As one of the most influential and ground breaking DJs of all time, Luciano makes his long awaited SW4 debut this summer. A storming 2014 witnessed the Swiss-Chilean maestro return to his brilliant best with an outstanding residency at Amnesia, resulting in him being crowned ‘Best Tech House DJ’ at the Ibiza DJ Awards. The past twelve months has also seen Luciano return to the studio to produce the 100th release on his seminal Cadenza Records, whilst this year has started just as frantically. Representing his first London performance in over two years, Luciano’s inaugural SW4 appearance promises to be one of the standout highlights of the entire weekend.

Dubfire is another long term favourite amongst the SW4 faithful who has chosen our event for the London debut of his new live show titled dubfire: live HYBRID. In what is his most ambitious achievement to date, the techno titan weaves together 2D and 3D animation with live audio and lighting, resulting in show that will blow the minds of all those in attendance.

As one of the biggest rising stars of the past year, Bakermat debuts at SW4 2015 in a UK festival exclusive. Having hosted his own stage at Tomorrowland over the past two years and headlined Brixton Academy last September, Bakermat will bring his melodic take on house music and preview tracks from his new album ‘Another Man.’

Fritz Kalkbrenner also brings his beautifully crafted sound to SW4 in a UK festival exclusive. Having sold out his upcoming Electric Brixton event a month in advance, Fritz has been busy touring Europe in support of his superb third studio album ‘Ways Over Water.’ His blend of heart-warming harmonies and soulful beats will work beautifully on our hallowed turf, as Fritz’s sound simmers in the sunshine.

Having been on our radar for several years now, we are delighted to welcome the killer grooves of Hot Since 82 to SW4 for the first time. With a career trajectory that has been nothing short of incredible during that time including four ‘Essential New Tunes’, two ‘Essential Mixes’ and a Mixmag cover, he shows no signs of slowing down. SW4 will be his biggest London show to date. Do not miss it.

Recent years has seen Saved Records label boss Nic Fanciulli consolidate his position as one of the UK’s finest DJs, whilst his imprint celebrated its 100th release in 2014. With a hugely successful residency alongside Joris Voorn taking Ibiza by storm last summer, Nic will bring the sound of the White Isle to Clapham Common and make SW4 2015 his stand-out performance of the year.

Hot on the heels of his UK #1 track ‘I Wanna Feel’, SecondCity made his SW4 debut last summer. We have been working hard to bring him back ever since. 2015 has seen SecondCity establish himself further as one of the most talked about newcomers in electronic music. Be sure to keep an eye on this one as he’ll be even hotter property come August…

A national icon and cultural phenomenon in South Africa, Black Coffee takes time out from performing in stadiums in his home country for a rare UK performance. Make sure you check out Black Coffee’s unique afro-house sound on the Common and see for yourself why the meteoric rise of this SW4 debutant is fully justified.

With an outstanding upcoming release schedule and a hugely successful quarterly residency at The Gallery at Ministry of Sound, now is the right time for Anjunabeat’s first label showcase at a London festival. The finest names from Above & Beyond’s owned and A&R’ed imprint will be showcased, as the labels fans make a welcome return to Clapham Common.

With a record breaking number of SW4 devotees signed up for our exclusive pre-sale, the demand for tickets to this year’s Clapham Common extravaganza is going to be crazier than ever. This Wednesday 18th February at 9am, Saturday and Weekend pre-sale tickets will be released to those who have signed up via the SW4 website. Limited to 8 per customer these pre-sale tickets will be priced £52.50 and £105 respectively and once sold will increase in price. Those who purchase eight tickets will get their 9th absolutely free. This very special offer will run for a limited time only and is available on a first come, first served basis. Sunday only tickets will be available when we announce the 2nd day headliner.

If you are yet to sign up make sure you join the thousands that have already by registering at www.southwestfour.com.