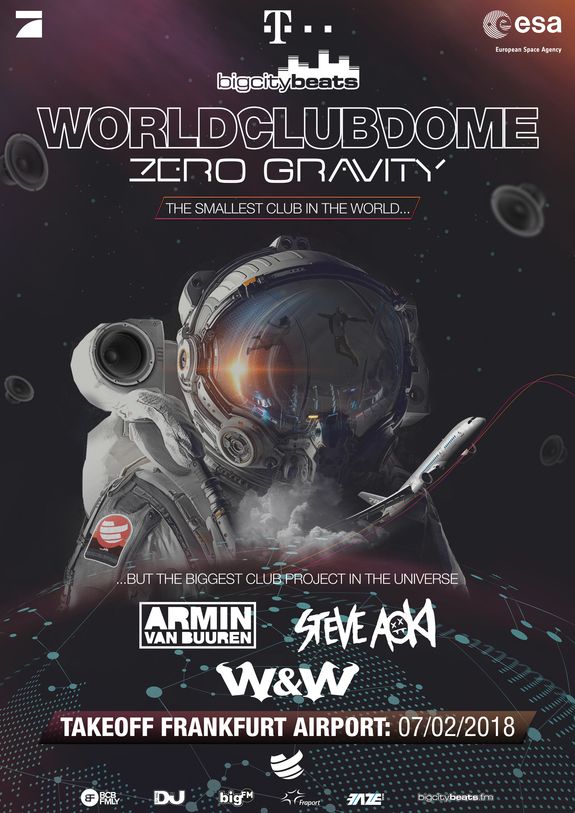 Clubbers from around the world applied to a competition to gain a spot on board the ZeroG A310 Airbus flight to join headline DJs Armin van Buuren, Steve Aoki and W&W on this unique mission. The applicants were from far and wide, with winners from Australia, Brazil, Germany, South Korea, the UK, USA and many more making up a total of 50 participants and competition winners together on board the flight.

“I’m super excited BigCityBeats invited me to this crazy event, partying high up in the sky in Zero Gravity” – Armin van Buuren

“DJing on a plane, I never thought I would do that. Now I’m DJing on a plane and doing Zero Gravity. WORLD CLUB DOME always does the craziest and most insane projects which is why I love working with these guys” – Steve Aoki

“I am the chief astronaut on the ZeroG flight, and am very excited to participate in the first club built in weightlessness.” – Jean- Francois Clervoy (ESA Astronaut)

WORLD CLUB Dome Zero Gravity is the official pre-party to BigCityBeats’ WORLD CLUB DOME “The Hollywood Edition” which will take place in Frankfurt this summer from June 1-3 2018.

Stay up to date with all things WORLD CLUB DOME at https://www.facebook.com/worldclubdome/