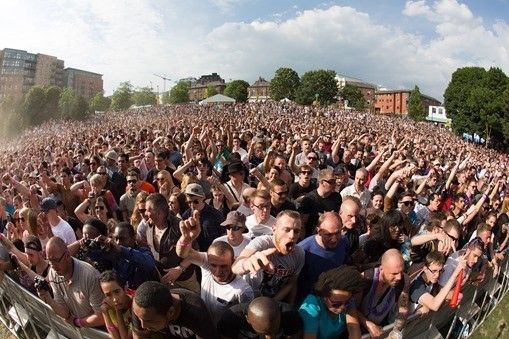 Tramlines is thrilled to announce that The Charlatans, Basement Jaxx and Wu Tang Clan will headline the festival, taking place in Sheffield from Friday 24 to Sunday 26 July. Over 30 new acts have been added to the 2015 bill including The Streets frontman Mike Skinner and critically-acclaimed DJ/producer Erol Alkan, who will join the acts already announced including Sugarhill Gang, Buzzcocks, Melle Mel & Scorpio, Martha Reeves and Billy Bragg. Weekend tickets are now on sale for £30 from www.tramlines.org.uk, furthering Tramlines’ reputation as a festival that consistently offers amazing value for money.

Best known as one of the UK’s biggest urban festivals, Tramlines attracts 100,000 festival-goers looking for an alternative experience to the ‘green field’ festival. It spans four outdoor stages and over 20 indoor live music spaces including the o2 Academy and Sheffield Cathedral, with diverse music and entertainment across every inch of the city.

With a strong focus on staging genre-spanning artists, Tramlines once again offers a diverse and exciting range of headliners. Indie rockers The Charlatans are set to roll out hit singles such as The Only One I Know and One To Another, alongside material from their recently released 12th studio album Modern Nature. Highly influential dance outfit Basement Jaxx will bring their colourful, high-energy live show to the stage with hits like Good Luck and Where’s Your Head At, while Wu Tang Clan – probably the most revolutionary rap group of the mid-’90s – will perform the likes of C.R.E.A.M. and Gravel Pit with MC royalty RZA and Method Man at the helm.

The electronic offering at Tramlines 2015, which already features Roman Flugel and Blanck Mass, expands with sets from Mike Skinner, Phantasy Sound founder Erol Alkan, Detroit’s Jimmy Edgar bringing with him his signature robot-funk techno sounds, and a man who has been at the forefront of the UK techno scene since 1994, Surgeon.

For those wishing to discover tomorrow’s biggest names in music, Tramlines has a knack for showcasing artists before they hit the big time, with acts including George Ezra, Charli XCX, The xx and Alt-J amongst those to have performed in previous years. Appearing this year are BBC Introducing band Aquilo, with their dreamy electro-pop sound, solo artist Charlotte OC with her soulful vocals edged with funk basslines and synths; post-disco-RnB duo Ekkah, who’ve supported Clean Bandit and Jess Glynne; hotly tipped rising stars of the UK jazz scene GoGo Penguin and Glaswegian duo Honeyblood who have toured as part of NME New Breed tour with Superfood and Catfish and the Bottlemen.

Adding further diversity to the lineup are Tramlines regulars Rolo Tomassi, who this year celebrate ten years as one of UK’s boldest and most unique alternative rock bands and, at the other end of the musical scale, Ultimate Painting, formed by James Hoare and Jack Cooper from two of Britain’s best traditionalist indie bands, Mazes and Veronica Falls.

On the new announcements, Tramlines festival director Sarah Nulty commented:
“We knew we had to pull out something special to follow the likes of Public Enemy and Sister Sledge last year, and we think we’ve done it with 2015’s headliners. We’re really excited to welcome some true legends to the Tramlines stages. As ever, there’s a ton of great breaking talent on this year’s bill too, and we can’t wait for people to tell us about discovering their new favourite band.”

Weekend tickets can be purchased from www.tramlines.org.uk for only £30, which makes Tramlines one of the UK’s best value festivals to attend.