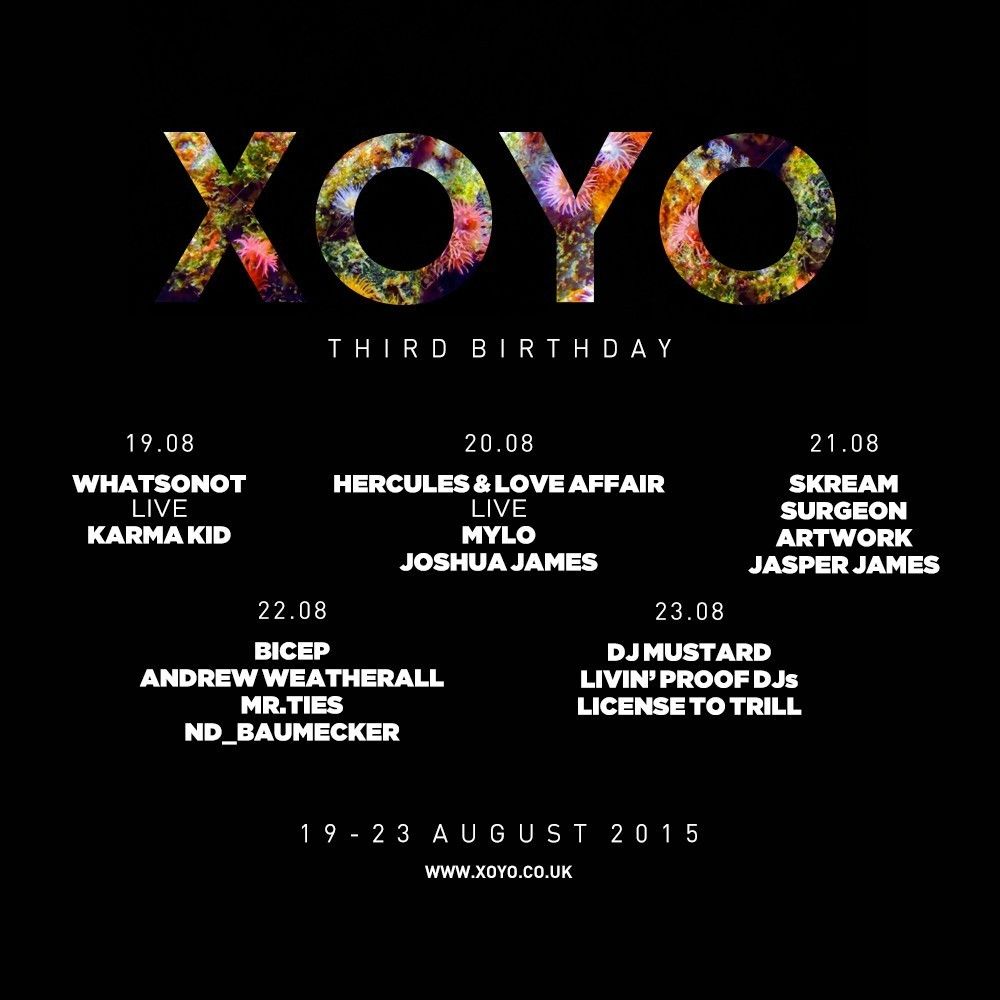 This August we hit three years old with a lot of pride, after another incredible twelve months worth of parties.

As the residency continued with the likes of Skream, Benji B and now Bicep, this year also saw the birth of Gloria’s (our new venture alongside Sink The Pink, bringing together the night-lives of the straight/pan/poly/gay/ or whatever you want to call yourself), and stand out nights with Four Tet, Eats Everything, Robert Hood, ASAP Rocky, Jamie XX, Mos Def and Hudson Mohawke amongst many others.

We’re always eager to mark our birthday in some way. For us, it’s an opportunity to reflect on what’s been as well as celebrating the people (everyone from the crowd, the DJs to the staff and beyond…) who make XOYO the nightclub it is.

This time around, we present you five parties over consecutive nights. An eclectic schedule bringing together the artists and DJs we love and admire…

Wednesday 19th August
What So Not (live)
Karma Kid


Australian dance duo What So Not kick things off on the Wednesday. Made up of Flume and Emoh Instead, the pairing are fresh from touring with Skrillex and working with Action Bronson – they’ll be supported by prodigal DJ Karma Kid.

UK techno pioneer Surgeon makes his XOYO debut on the Friday night – and we couldn’t be more excited. Past-resident Skream and rising talent Jasper James are in the main room, with the incredible Artwork (back once again since his Art’s House session earlier in July) taking over Room 2 – making this one of the highlights of the series.

Bicep’s residency falls part of our birthday celebrations this year. Already heading up a powerful string of nights, there are no qualms this will be anything short of hefty.  The legendary Andrew Weatherall, enigmatic Italian DJ Mr Ties and Berghain resident ND_Baumecker join them.

Finally closing the celebrations comes one of America’s best beat-makers, DJ Mustard. The acclaimed LA producer is sure to bring a fitting end to our 5-night.