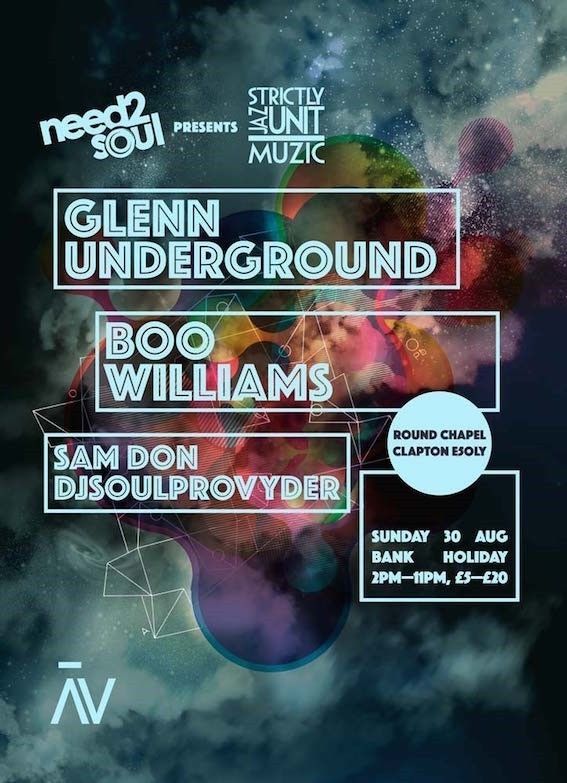 NEED2SOUL is back with a super special all-dayer for the August bank holiday, this time at East London’s most unique venue, the Round Chapel in Hackney. Headlining the party are two founding fathers of Chicago house Glenn Underground & Boo Williams, both playing extended sets as Strictly Jaz Unit to celebrate their forthcoming album’s signing to Need2Soul Music, set a for a relaunch this year. Local spinners Sam Don and djsoulprovyder will be warming things up from early doors, and outside there’ll be gourmet street food stalls for essential refuelling ahead of these epic sets from a pair of masters.

Meeting on the Chicago scene in the early 80s, while both were DJs at seminal clubs such as The Power Plant (owned by Frankie Knuckles) Boo Williams became somewhat of a production protégé to Glenn Underground after hanging out at those formative Lil’ Louis parties back in the day and Glenn’s early productions found their way into Boo’s tape deck, sparking a life long mutual respect and creative relationship. Glenn founded Strictly Jaz Unit (with Tim Harper) in 1996 alongside Boo – a project that has rendered some of the most deep and soul lifting music in house history and one that’s still alive and kicking today. After inviting Glenn to play solo all night back in February, Need2Soul is proud to present this legendary duo for a special bank holiday affair at The Round Chapel, on 30th August and to celebrate the re-launch of the imprint Need2Soul Music.

Established in 2005 to house some of the unreleased material spun at the legendary early parties, Need2Soul Music has experienced a hiatus in recent years, after putting out killer original music from house greats such as Ron Trent, Robert Owens, Roland Clark, Anthony Nicholson and of course Glenn Underground. Making a welcome return a decade on, the original ethos prevails with a brand new album from Strictly Jaz Unit slated for the label in Autumn. Sure to be an essential purchase, the alchemy between these two musical geniuses is about as real as it gets.

Need2Soul have been doing their thing since 2004. Dedicated purveyors of timeless house, disco, techno, jazz, soul and more, Need2Soul have an uncompromising and underground, music-first approach that was at first inspired by legendary New York Sunday party Body & Soul. Since its incarnation, the party has hosted deep house masters including Ron Trent, Moodymann, Theo Parrish, and the Body & Soul trio (Danny Krivit, Francois K & Joe Claussell) the latter returning year in year out making Need2Soul their London spiritual home. Keeping the old school ethos alive, Need2Soul operate with integrity in a madly oversaturated modern clubland, providing a journey back to halcyon days in a fresh London setting. Don’t hesitate – grab your tickets now. Super early birds £5 for a limited time only.