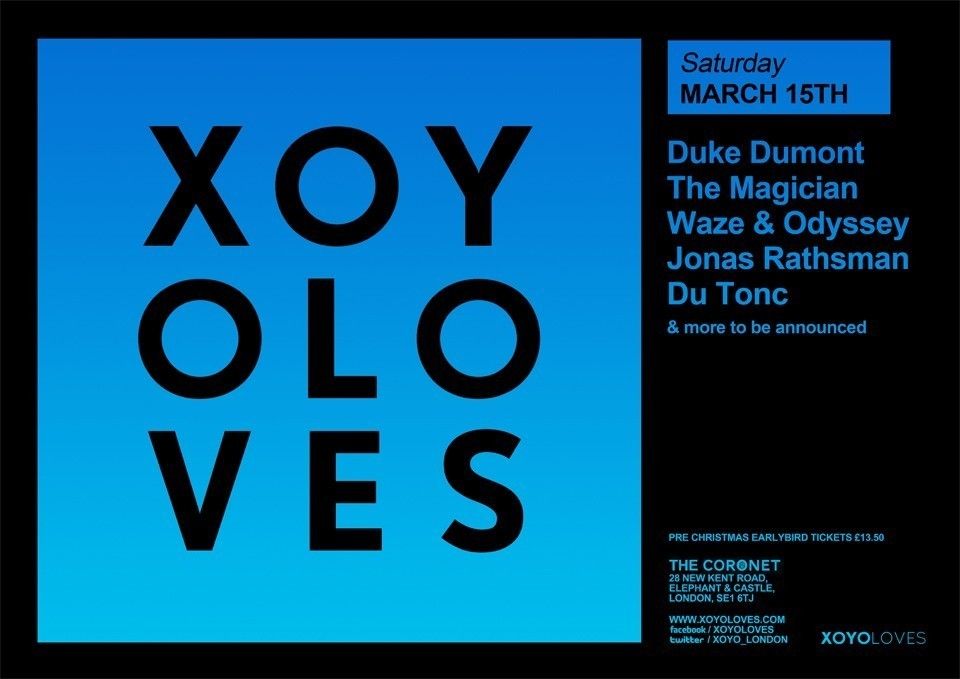 This year the team behind XOYO and The Nest present XOYO Loves. A brand-new platform, we want to push the artists we listen to, the DJs we dance to and the promoters we party with in the most exciting way we can. After a string of hotel parties and two memorable winter shows at The Coronet Theatre we’re heading back down South…

In November XOYO Loves threw two huge sold-out parties with standout sets from Klangkarussel, Crazy P, Friendly Fires and Hercules & Love Affair. Featuring big screen visuals, balloon drops and bespoke lasers, the production on these shows has garnered universal praise. This March, we plan to rival those nights returning with one of our biggest line-ups to date…

XOYO Loves are excited to welcome Duke Dumont to headline The Coronet Theatre on Saturday 15th March. Scoring a number one with the Grammy-nominated ‘Need U (100%)’, Duke Dumont has by any DJs standard had a mind-blowing 2013. By the sounds of his latest release ‘I Got U’ – he’s on track to have an even bigger 2014.

The Magician joins him. One of XOYO and XOYO Loves’ favourite selectors, his modern disco touch has made him an essential DJ in Clubland. Waze and Odyssey are a welcome addition to the line-up too. Over recent years they’ve become one of the most-talked about dance acts around as they push a 90s-style bend of house. Check championed single ‘Love That Burns (Hot Enough)’ and their ‘Bump and Grind’ bootleg.

Expect big things from French Express’ Jonas Rathsman. Dropping the underground anthem ‘Bringing You Down’, Jonas Rathsman proved his weight across international Clubland. With consistently stellar releases, he’s far more than a one-track hit. Du Tonc’s dark nu-disco will no doubt satisfy on the night as well. Stay locked for further line-up announcements, we promise you won’t be disappointed…

Transforming the South London venue into an upfront clubbing experience: expect on-point production and a soundtrack to keep you up till morning. See you on the dancefloor.