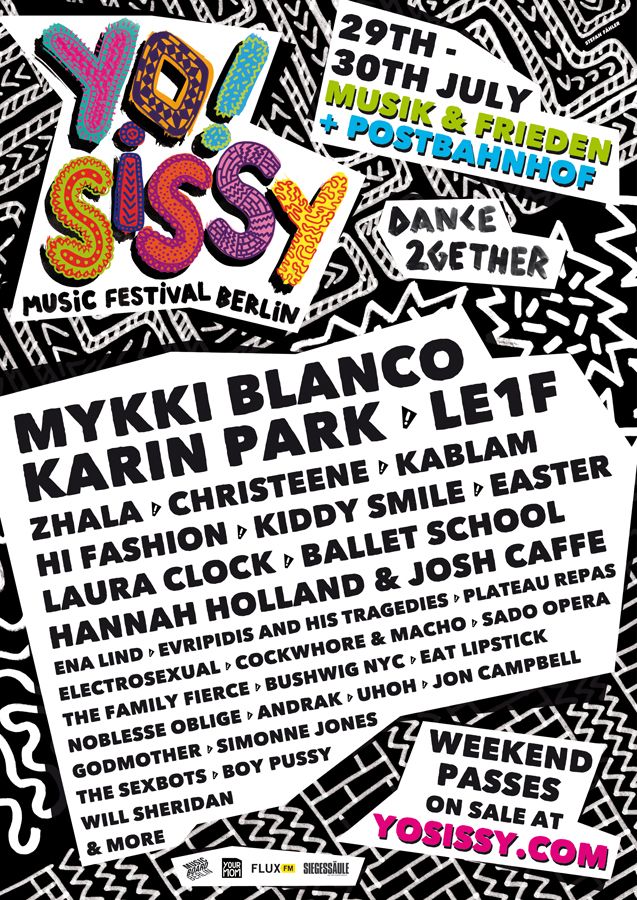 After a triumphant debut last year, Germany’s international queer festival Yo! Sissy returns for the second time bigger, better and camper than ever. With another eclectic line-up showcasing the very best in quality, alternative queer artists, live bands and performers, including Mykki Blanco, Karin Park, and Le1f,  the festival is set to take place over two days in Berlin this July.

The first Yo! Sissy was the largest festival of its kind to ever take place in Berlin, a city famous for its colourful culture and LGBT inclusivity. With a focus on showcasing female and trans-identified performers, last year featured colourful performances from the likes of Peaches, Cakes da Killa, Crystal Waters and JD Samson. Following a successful Kickstarter campaign, this year the festival will open Friday 29th July, at Musik und Frieden, followed by an ‘all day blowout’ on Saturday 30th July at Postbahnhof.

But aside from a line-up celebrating a broad mix of styles, Yo! Sissy aims to create an inclusive atmosphere for all. Born out of two parties – the dragtastic Sissy and the equally campy Cherry-O-Kie – the festival’s organisers Pansy and Scout have said the event is part of their mission ‘to promote the energy, diversity, and lifestyle found within Berlin’s diverse queer community and a wish to share that experience on the dancefloor with people from across the globe.’ As such, the theme for this year’s festival is DANCE TOGETHER. ‘We want to bring performers and audience members from all over the world to join in a celebration of music, dance and performance in the city we call home.’

With early bird weekend passes still available for 40€ until May 17th, Yo! Sissy Festival is setting the trend for forward thinking, unique line-ups with affordable prices and progressive ideals. From this time day tickets will also be available for 25€.