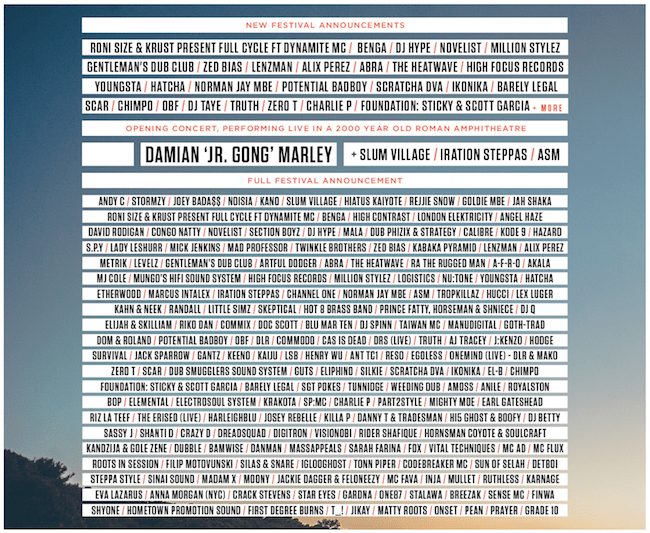 One of the most revered breakthrough acts of 2016 and Queen of ATL rap squad Awful Records, ABRA brings her gothic steez to the fort, and bashment madness comes from Outlook regulars The Heatwave. The High Focus Records crew add a hip-hop flavour, whilst dubstep mainstays Youngsta and Hatcha both return for sets with speaker-shaking basslines. On the flip-side, revered crate-digger Norman Jay MBE presents a soul-searching journey between house, hip-hop and every genre between, whilst Playaz’s Potential Badboy will venture through jungle rhythms. Two of Hyperdub’s most revered exports, Scratcha DVA and Ikonika also join, alongside Hyperdub / Teklife affiliates Jackie Dagger & Feloneezy.

Located in one of the most picturesque locations in Croatia, Outlook Festival finds it’s home in an abandoned fortress – undoubtedly one of the most unique festival settings in the world. The five day festival is balanced between an all-out rave and holiday, a mix of chilling on the beach all day and dancing as long as the music lasts. No where else will visitors be able to experience highest spec sound like Outlook Festival, an event that prides itself on its deeply rooted appreciation of sound design. With tickets selling faster than ever, it’s advised that tickets are purchased or deposits are secured asap for those who wish to attend. To take part in Outlook Festival 2016, head to : outlookfestival.com/tickets/uk/. Stages, boat parties and more on-site extra’s to be announced.

Nearby Pula is easily accessible by taxi from the Outlook Festival site, and is complete with excellent transport links, apartment accommodation and historic sites. For those wishing to camp on-site, or for more information on accommodation options including boutique camping options, head to outlookfestival.com/accommodation/ to look at what is available. Flight options from the UK are to Trieste, Ljubljana, Zagreb, Venice Treviso or Venice Marco-Polo airports, and then a transfer to the festival site. Outlook Festival also organise coach packages and flight packages, all available to view / purchase at outlookfestival.com/travel/. See you at the fort!