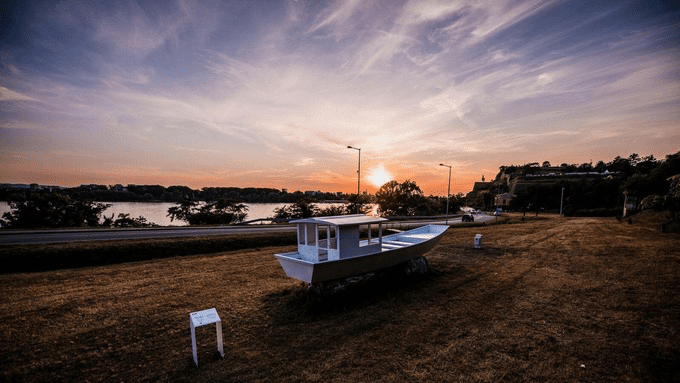 Just a week before its opening, the globally acclaimed EXIT Festival revealed the art installation by the peace activist and the multimedia artist Yoko Ono at its legendary venue, the colossal Petrovaradin Fortress in Novi Sad, Serbia.

The artist addressed the audience via video message and after the Serbian Prime Minister Ana Brnabic gave a brief speech, local children choir revelead the art while singing to John Lennon’s peace anthem “Imagine”. The installation is titled “One day…” and its looks are inspired by the traditional boat chaika, used by the Serbian frontiersmen who patroled the southern European borders with the Ottoman Empire. The date picked for the reveal was no less symbolic since it marked 100 years since the Treaty of Versailles was signed on June 28th 1919, officially ending the World War I. Together with Yoko Ono, EXIT thus declared the First World Peace, as the only major music festival in the world that started from the social activism growing in the past two decades to more than 200,000 visitors annually.

EXIT’s founder Dušan Kovačević says Ono’s work resonates with the festival’s values and peace initiatives in the last two decades: “EXIT was the first mass event to gather the young people of ex-Yugoslavia in one place after the wars of the 90s. Petrovaradin Fortress became the Fortress of Peace already then, and it is my exceptional pleasure that one of the most influential women of modern times recognized our social activism and decided to join us in such a significant project.”

The landmark was inspired by the Novi Sad 2021 European Capital of Culture program platform “Fortress of Peace”, since Petrovaradin Fortress is the largest defensive military fortress in Europe which has, however, not been a part of any battle or war operation ever since it was built in the 18th century. The work itself an altered ready-made riverboat that Ono appropriated, painted white and lit from the inside to make the boat glow in the darkness. The sculpture was made to commemorate the end of the First World War, in which millions of people, mainly young men, were lost. The festival used this centennial anniversary of the important historical event, and create the first great peace monument in this part of Europe. A special moment in the history of human consciousness development marks the fact that Serbia and Austria, whose conflict de facto initiated the WWI, currently have excellent relations on all fields, and this actually symbolically closes the full circle leading from war to peace.

Ono chose a local river boat to anchor the work in Serbian reality. However, it is an object and a form with broader connotations and symbolic meaning. It brings layers of signification, referring to the wars that have taken place on the Serbian rivers Danube and Sava. But beyond that to the people in general escaping the atrocity of wars by boat, including the recent migration of refugees over the Mediterranean Sea. A boat can is also a symbol of the journey through life, and thus as that which enables us to make such a journey, whether it be faith, education, desire or curiosity.

The #FirstWorldPeace initiative is a part of the EXIT Foundation strategy of improvement and preservation of the Petrovaradin Fortress. The mission of the EXIT Foundation is to preserve cultural and historical heritage of the Petrovaradin Fortress, as well as to promote its home town, Novi Sad. EXIT Festival is also part of the “Take a Stand” declaration, initiated by European Festival Association Yourope, of which EXIT is a member. The “First World Peace” project is part of this initiative, aimed at connecting people and creating a community of young people, via music and culture, in a peaceful and positive way. This project is realized with the help of Novi Sad 2021- European Capital of Culture, City of Novi Sad and NIS.