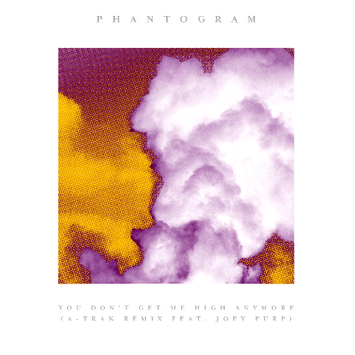 Phantogram are diving into 2017 with two new releases for fans – the first is a fresh take on their hit song "You Don't Get Me High Anymore" from remix legend A-Trak, with an additional verse from SaveMoney Crew's Joey Purp.  The remix is now available for purchase and on all streaming services,

While recently in Australia on tour, Phantogram recorded a cover of Radiohead's "Weird Fishes", in addition to their own song "Cruel World", for Triple J radio, which aired yesterday.

Phantogram – comprising Sarah Barthel and Josh Carter – are one of the breakout acts of 2016 in the US, with their latest album 'Three' charting at No.3 in the Billboard Album Chart. Lead single "You Don’t Get Me High Anymore" was a Top 10 hit at Alternative radio and Phantogram have performed the song on The Tonight Show starring Jimmy Fallon and The Late Show with Stephen Colbert. "You Don’t Get Me High Anymore" received its UK radio premiere on Annie Mac's Radio 1 show and has had over 9 million Spotify streams.

Phantogram are currently on tour in the US in support of their third studio album, Three, out now on Fiction. They will be in the UK for a headline show at London's Shepherd's Bush Empire on 4th April.