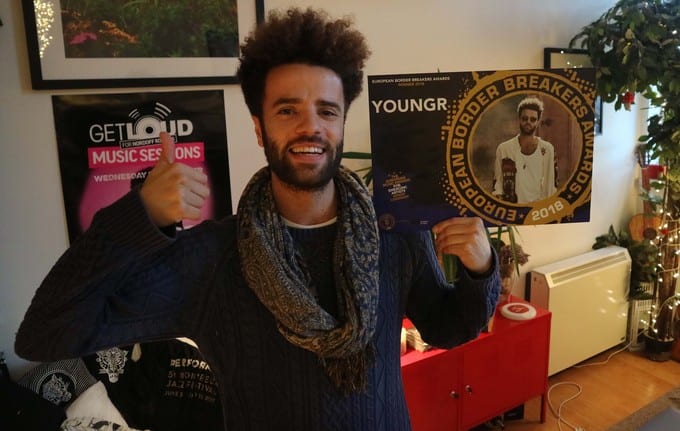 Youngr is announced as a  winner of a 2018 European Border Breakers Award (EBBA), the European music award for emerging artists who have seen outstanding success across Europe.

British musician Dario Darnell is now taking charts and concert halls alike by storm under the monniker Youngr with his addictive, sweet pop music. First single Out Of My System is an emotional electronic pop gem that racked up 30 million streams on Spotify alone. Another way of conveying the message is through his trademark one-take live video's. Darnell used to be in electronic pop duo Picture Book with his brother Lorne and is actually the son of American artist Kid Creole. Now the talented multi-instrumentalist is making some very serious strides on its own.

EBBA ceremony
Earlier, Blanche (Belgium), Alice Merton (Germany), Sigrid (Norway), Skott (Sweden), Off Bloom (Denmark) and Salvador Sobral (Portugal) were also announced as winners of an EBBA. A total of ten artists will be awarded an EBBA over the coming weeks. The winners will receive their award in a ceremony hosted by TV personality and musician Jools Holland at the Eurosonic Noorderslag festival in Groningen, Netherlands, on 17 January 2018. The ceremony will also feature performances by the winning acts.

Public Choice Award
All EBBA winners are also in the running to win the Public Choice Award. Fans from all over the world can vote online from the end of November up to Christmas for their favourite emerging artist. The winner of the Public Choice Award will be announced during the EBBA ceremony at the Eurosonic Noorderslag festival in Groningen. Up to ten voters, chosen at random from different countries, will be invited to the award ceremony. Each winner will be able to bring a friend with the flight and hotel costs covered by Eurosonic Noorderslag.

From the group of enthusiastic gig-goers out on the weekend to the industry dedicated to making the music you love, Music Moves Europe. The EBBA are one of the EU's ways of celebrating European popular and contemporary music, by bringing the artists, the industry and the fans together to celebrate European music.

15th edition of EBBA
Every year, 10 European artists receive an EBBA to recognise their success in countries other than their own. This success is measured by: airplay, sales, live performances in Europe, position in the European Border Breakers Charts

To be eligible for the 2018 awards, the artists must have achieved border-breaking success with their first international release in Europe between 1 August 2015 and 31 July 2016 and come from a country participating in the EU's Creative Europe programme.

The EBBA, now in their 15th year, is an EU Prize, organised by Eurosonic Noorderslag in partnership with the European Commission (Creative Europe) and the European Broadcasting Union, with support from Buma Cultuur, the Dutch Ministry of Education, Culture and Science, Province of Groningen, the City of Groningen and Music Week.