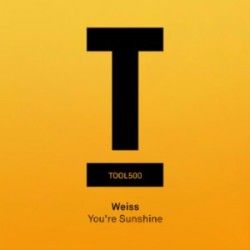 Ahead of further collaborations with Green Velvet and the next date of his residency, Weiss is back on Toolroom with his latest release ‘You’re Sunshine’, out on the 26th of August 2016.

With a 1990’s Chicago influence, Weiss demonstrates his ability to inject his passion for real house music with his latest offering. An uplifting, feel good record, ‘You’re Sunshine' incorporates a stunning vocal and lush Piano chords. Representative of his signature sound, he's created another record which is ready for the intimate dance floor space of his ‘Weiss City’ residency at EGG LDN this year.

In 2013, Weiss’ career was launched spectacularly, being championed by the likes of Groove Armada, Green Velvet, Loco Dice and many more. Weiss’ debut single ‘My Sister’ was rotated on BBC Radio 1 and strongly stayed in the Beatport top ten chart for over four months. Due to Weiss’ distinctive sound and style, he’s been high in demand for remix duties for acts including MK, Rudimental, Gorgon City, Green Velvet and many more. His touring schedule has seen him perform on some of the world’s most famous stages, including at Fabric London, BPM Festival Mexico,  Exchange LA and Vista Club Ibiza.

Most recently he has seen success on labels such as Play It Down, Relief and Toolroom, with every release racing up the Beatport charts and gaining worldwide support. At the beginning of 2016 Weiss launched his own night 'Weiss City' which is going from strength to strength; it now has a residency at the Egg with the 3rd event on the 1st October, with Weiss, S-Man & Mat.Joe with future plans to take the U.S by storm in 2017.

Following the release of ‘You’re Sunshine’, Weiss will be collaborating with Green Velvet on Relief dropping in October and Jesse Rose on Play It Down in November.