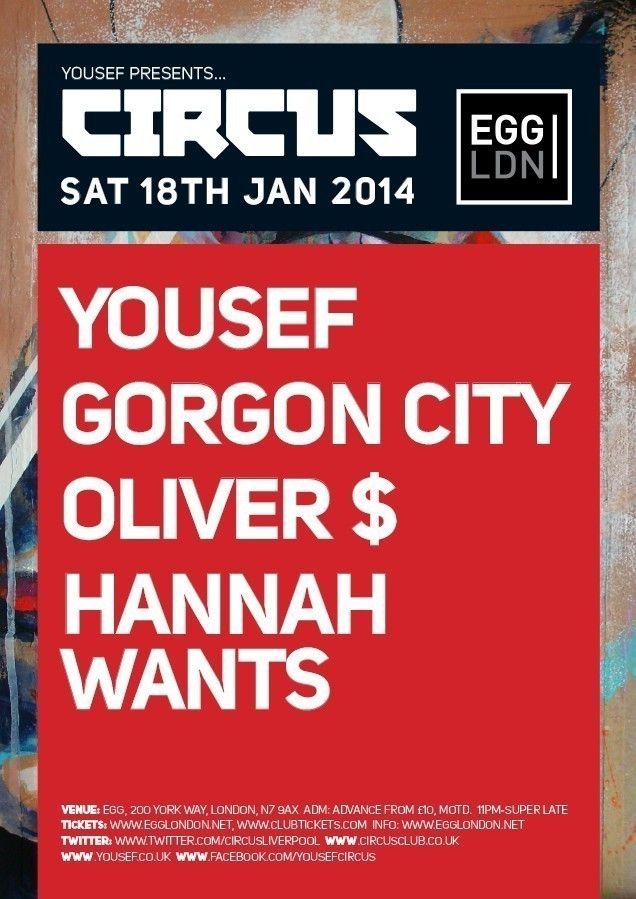 18th January 2014 is the first date in any discerning dance music fan’s calendar, as the first Circus party of the year rolls into EGG London.

Throughout 2013, Circus London exceeded all expectations to deliver an array of amazing events that featured performers including Laurent Garnier, Hot Since 82, Monika Kruse, Dennis Ferrer, Nick Curly and Booka Shade. Still reverberating from Objecktivity’s take over of Circus London last month Yousef and the team have pulled together a line up to keep the underground dance music fans of the capital hyped for 2014.

Circus founder and curator Yousef heads up proceedings, and beside him you’ll find, Gorgon City, Oliver $ and Hannah Wants.

Headlining Yousef, gearing up to take Circus to another level in 2014. Following the successes of 2013, which include a release from Defected with ‘I See’ Ft Charli Taft and hugely noted ‘Float Away’ on FFRR, 2014 will see Yousef release on Objektivity as well as Loco Dice’s famed desolat. His own imprint Circus Recordings also enjoyed huge success with Green Velvets ‘Bigger Than Prince’ and Harry Romeros ‘The Butcher EP’ this year expect material from Reboot, Carl Cox and many more.

North London duo Gorgon City are hot property and are currently starting a new adventure with Virgin/EMI after a spell with Black Butter. Following a tour of the UK Australia with Rudimental, the duo continue to make an impression having dominated the festival season with appearances at Glastonbury, Global Gathering, Parklife and Hideout, in addition to holding a summer residency at Space Ibiza.

Oliver $ stock has risen throughout the last 5 years, building into a staple name of House music. Berlin born and based, he has gained acknowledgment as a producer through a series of releases on labels such as Play It Down, Rekids and Front Room Recordings. Remix credits can be found amongst the most famed independents; including Greco Roman, and Exploited as well as majors: Polydor and Ministry of Sound.

Hannah Wants will be taking over Room 2 of EGG. Hailing from the Midlands, Hannah has rapidly gained a name for herself among electronic music lovers all over the UK with her bass heavy style. Still early in her career, Hannah has risen through the ranks of clubs in Ibiza playing alongside the likes of Annie Mac, Disclosure, Justin Martin & SBTRKT.