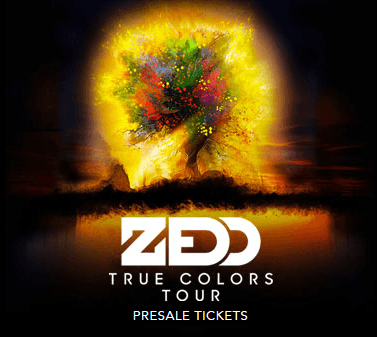 Having executively-produced the album and co-written each track – with featured vocalists including Selena Gomez, Jon Bellion, Bahari and Troye Sivan – ‘True Colours’ is the follow-up to Zedd’s 2012 debut album Clarity, which spawned five singles including the Grammy-winning title track and cemented Zedd as a global star.

True Colours’ first single, ‘I Want You To Know’ featuring Selena Gomez, has already claimed the #1 spot on iTunes in over 30 countries, amassing over 100 million Spotify streams and over 50 million views on the official video in the process. The album itself also debuted at #4 on the US album charts becoming the biggest-selling dance record in the US since Daft Punk released ‘Random Access Memories’ in 2013.

To tie into the release of the album, Zedd has also announced more live dates in November as part of the ‘True Colours’ Tour. Kicking off in Copenhagen on 11th November, UK dates include Dublin, Glasgow, Manchester and London. Tickets go on general sale from 9am Thursday 9th July. Pre-sale tickets go on sale from 9am Wednesday 8th July at http://zedd.seetickets.com

See below for full listings.

About Zedd
Born Anton Zaslavski, Zedd has distinguished himself by drawing from his diverse musical training and a background spanning classical to post-hardcore/metal to electro house. He creates detailed, carefully produced compositions that also appeal to audiences outside of the EDM world. The New York Times has said, “his talent is extraordinary,” while Stereogum has noted: “His beats tend to sound like gorgeously engineered spacecraft that shift into warp speed at the drop, their engines overloading and threatening to disintegrate.” After signing with Interscope Records in 2012, Zedd releasedClarity to much critical acclaim. The title track climbed to No. 2 at Top 40 radio, went Top 10 on the Billboard Hot 100, and won a 2014 GRAMMY Award for Best Dance Recording. The video has racked up more than 122 million Vevo views, while his platinum follow-up hit “Stay The Night” (ft. Hayley Williams of Paramore) has over 102 million Vevo views and won the 2014 MTV Clubland Video Music Award. Zedd first made waves with a series of remixes of tracks by Skrillex, The Black Eyed Peas, Fatboy Slim, and Lady Gaga. He has headlined at numerous festivals including Coachella, Outside Lands, Bonnaroo, Ultra, Electric Daisy Carnival, Nocturnal, Tomorrowland, Lollapalooza, Electric Zoo, and many more.