​​Bantu Releases Video For Which One Ft. Alicaì Harley Today

​​Bantu Releases Video For Which One Ft. Alicaì Harley Today

Rising Zimbabwean hitmaker, singer and producer Bantu shares the video for his new single ‘Which One’ featuring Alicaì Harley today.

The perfect recipe for a summer smash, the video was filmed in LA, directed by Bantu and James Davis II and features the Jamaican Born, London based hotly tipped singer and rapper, Alicaì Harley. Written and produced by Bantu, ‘Which One’, has garnered major playlist support across Spotify, landed radio support from BBC 1Xtra, Capital Xtra and specialist radio and has been championed by DJ Target, Toddla T and MistaJam to name a few.

‘Which One’ follows Bantu’s last single ‘Roll With Me’ featuring Shungudzo and ZieZie -which has garnered over 10 million streams to date- and his feature alongside Anuel Aa on Nick Minaj’s ‘Familia’ which was an integral track on the soundtrack for animated film, Spider-Man: Into The Spider-Verse. Hailing from Zimbabwe, Bantu’s music and visuals reflect his multicultural background, with a collage of infectious sounds, rhythms and stories. A Grammy nominated singer and producer, Bantu has produced and written for some of the world’s biggest artists (including Jason Derulo, Rita Ora, A$AP Rocky, Camila Cabello and Pitbull) and shares his management team with Sean Paul.

Bantu released his first single as an artist, ‘Holiday’, in 2016 and his debut EP ‘Africa for the Summer’ in August 2017. In 2018 his single ‘Just a Little’ was featured in the Netflix hit series “On My Block”, and his ‘Jackie Chan’, appeared on the FIFA 19 soundtrack. Bantu is the first artist signed to Blue Future, Jonas Blue’s label founded in partnership with Virgin EMI.

Earmarked as an artist to watch for 2019 by everyone from BBC Radio 1Xtra, Capital Xtra and Redbull through to Grazia magazine, Alicaì Harley has received a wealth of critical acclaim for her beat-heavy, dancehall-infused pop sound. Following on from her breakout single ‘Gold’ Alicaì’s notable releases include female-empowerment anthem ‘Proper Paper’, ‘Do That’ (featuring Dancehall legend Tony Materhorn), a collaboration with Toddla T (‘Instructions’) and her interpolation of Destiny Child’s classic ‘So Good’. 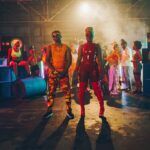