Ban Drill is the first track to be lifted from Krept & Konan’s highly anticipated second studio album. Produced by AdotSkitz (Stormzy, French Montana, Skepta), Ban Drill addresses the controversial move by the State and the Police to use Drill music as a scapegoat to tackle violent crime in the UK:

“We wrote ban drill to explain a serious reality that many artists have to face. We knew Rapman was the perfect person to paint this picture for us with a short film in the way we needed to get our message across.” – Krept and Konan

The accompanying short film, directed by Roc Nation’s recent signing Rapman (Shiro’s Story), is an emotional journey into the reality of a marginalised youth, largely demonized and forgotten by authorities, for whom making music provides a ‘way out’. Filmed in various London locations, the short film features cameo appearances from artists such as Dig Dat, Headie One, Unknown T, D Block Europe and K Trap, in addition to internet sensation Likkleman and actors Gerrome Stafia (who plays the lead role of Jayden in the short film), Malcolm Kamulete (Top Boy) Judith Jacob (EastEnders) and Tiffany Brown (Shiro’s Story).

The release of Ban Drill follows the premiere of the short film and a debate on whether censoring Drill music and prosecuting Drill artists is an effective way to combat crime. The debate, held at the Electric Cinema in London earlier today, was mediated by Hattie Collins (Beats1 Radio Presenter and This is Grime author). Panellists included: Krept & Konan, Rapman, George The Poet, Faron Alex Paul, Headie One and media and human rights specialist at Doughty Street Chambers, Jude Bunting.

To mark the release of Ban Drill and to drive home its message Krept & Konan have launched a petition in collaboration with Change.org asking the Crown Prosecution Service to stop the Police from being able to Ban Drill music by using the Serious Crime Act to prosecute artists.

After making history with 7 DAYS and 7 NIGHTS, when they became the first act ever to have two mixtapes simultaneously enter the Top 10 of the Official UK Albums chart, the past year has seen Krept & Konan headline a sold out date at Alexandra Palace, a main slot at Wireless and Reading & Leeds Festivals, as well as successfully launching their restaurant Crepes & Cones in their native Croydon.

‘BAN DRILL’ RELEASED VIA VIRGIN EMI IS AVAILABLE ACROSS ALL PLATFORMS NOW:
https://KreptxKonan.lnk.to/BanDrillPR 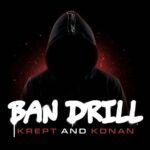