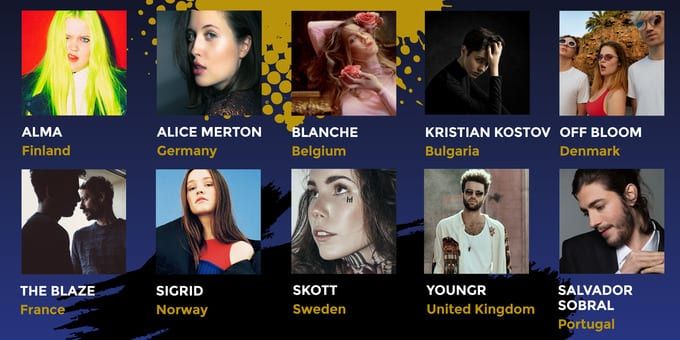 Vote for your favourite EBBA winner and win a trip to the EBBA show and Eurosonic music festival.

The last act of the 10 winners of the European Border Breakers Awards (EBBA) 2018 was revealed today. The European music prize dedicated to up-and-coming acts, this year go to the following;

The awards recognise new acts based on success outside their own country, and from now until Christmas, music fans can vote online for their favourite EBBA winner. The act that receives the most votes will win the 'Public Choice Award'.

EBBA ceremony
All the winners will feature in the award show, hosted by musician and presenter Jools Holland. Watch the show live on Wednesday the 17th of January, 7:15 PM CET on the European Border Breaker website (www.europeanborderbreakersawards.eu).

Public Choice Award – EBBA 2018
From December 4th until Christmas, fans are invited to vote for their favourite artist among the winners on the European Border Breaker website (www.europeanborderbreakersawards.eu). The winner of Public Choice Award will be revealed at the EBBA ceremony live in Groningen. Last year’s Public Choice Award winner, emerging UK artist Dua Lipa, has gone on to become a chart-topping act.

Win a trip to the EBBA
By voting, European music fans are in with a chance of winning an expenses-paid trip to Groningen to attend the award show and the Eurosonic festival. Up to ten voters, chosen at random from different countries, will be invited to the award ceremony. Each will be able to bring a friend with flight and hotel costs covered.

From enthusiastic gig-goers out on the weekend to the industry dedicated to making the music you love, it is clear that Music Moves Europe. The EBBA are one of the ways the EU celebrates European popular and contemporary music, bringing the artists, the industry and the fans together to celebrate the very best of European musical diversity.

15th edition of the EBBA
Every year, 10 European artists receive an EBBA in recognition of their success in countries other than their own. This success is measured through a combination of airplay, sales, live performances in Europe, and position in the European Border Breakers Charts. To be eligible for the 2018 awards, the artists must have achieved border-breaking success with their first international release in Europe between 1st August 2016 and 31 July 2017 and originate from a country participating in the EU's Creative Europe programme.