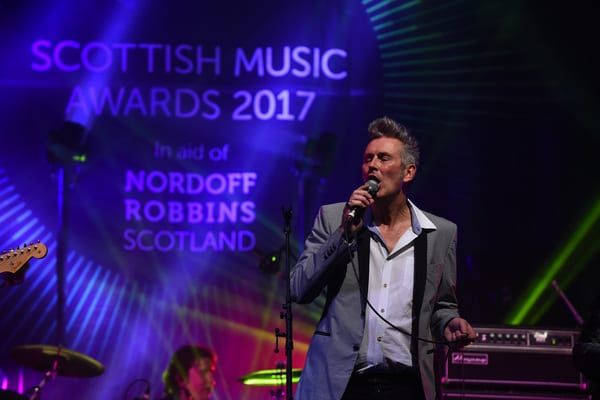 The Waterboys’ keyboard player Brother Paul had made the journey over from Nashville to collect their SSE sponsored prize and has gone back with a top auction prize in his pocket, a £1000 of wedding cake vouchers for Special Days Cakes – when asked how he was going to get the patisserie products back to Nashville, he answered ‘Who cares, I’ll find a way!”

A particular highlight of the night included a personalised video message from The Rolling Stones themselves! Arguably the greatest band of all time, the iconic line-up, includingMick Jagger, Keith Richards, Charlie Watts and Ronnie Wood, sent a message for the winner of the Scottish Music Hall of Fame, sponsored by the Royal Highland Centre, Ian Stewart. Born in Fife, Ian was the co-founder, pianist and subsequently road manager of The Stones with Keith Richards himself writing in his 2010 autobiography, “Ian Stewart. I’m still working for him. To me The Rolling Stone is his band.” Ian’s wife and son collected the award and were both touched by the surprise video from Ian’s fellow Rolling Stones Keith, Mick, Charlie and Ronnie. Mick Jagger said: “You know the thing about him was that I don't think the Rolling Stones would ever have got going if it hadn’t been for him.  He was a great player.  He was a great piano player.  He was a great guy that got us all together.”

Ian’s wife Cynthia Stewart, said: “Since Stu’s death a lot of people have asked us to do interviews about him but we’ve always refused as it’s not what he would have wanted. However, when Billy Sloan phoned and asked us to accept an award from Nordoff Robbins and talk about Stu with them we had said absolutely yes because he would have been tickled pink to receive an accolade from a charity like this. Thank you so much.”
Muriel Gray accepted the award on her behalf, “We are both so proud of him, I am just going away to have a wee greet!”https://we.tl/Q2FtPYVpgzhttps://we.tl/Q2FtPYVpgz

With the night hosted by comedian Sanjeev Kohli, the audience were treated to laughs, tears and surprises as industry professionals sat side by side with music stars such asEmeli Sandé, Nina Nesbitt and Hipsway. The country’s most celebrated acts, as well as the best up and coming artists, were honoured with awards.

Rock legends Alice Cooper sent a video message regarding their award win for Best International Artist sponsored by Chisholm Hunter, which they were presented when they were in Glasgow again in November, for only their second show in the city since 1972.

One of the biggest cheers of the night was reserved for young Scottish star Lewis Capaldi, who was honoured with the Breakthrough Artist Award, sponsored by Jack Daniel’s. Lewis has had a phenomenal 2017, releasing his first single ‘Bruises’, an outstanding performance at the inaugural TRNSMT Festival and travelling around the world supporting acts such as Rag’n’Bone Man. A delighted Lewis took to the stage saying, “It’s great to be recognised by the folk in music in Scotland, it feels like I’ve been welcomed into the industry.”

The star-studded bash saw some amazing items up for auction, such as a Craig Campbell portrait of Debbie Harry, signed by the woman herself, going for £18k! The ultimate Game of Thrones experience also went for £10k. This trip of a lifetime includes dining with Game of Thrones executive producer Bernie Caulfield, a private meeting with the Direwolves, an exclusive Game of Thrones gift basket with items straight from the set, a two night stay in a suite at a luxury 5 star hotel and return flights to Belfast!) Title sponsors SSE also donated a framed Andy Murray racket that went for £1200.

The Waterboys were unable to attend tonight’s ceremony and cake-love Brother Paul(keyboard player with The Waterboys) accepted the accolade in their place. The band were awarded the SSE Outstanding Contribution to Music.

Leading energy company SSE returned to sponsor the 19th Scottish Music Awards, which simultaneously celebrates Scotland’s world-renowned music scene and provides much-needed fundraising for vulnerable children and adults across the country. The SSE Scottish Music Awards are a vital part of the charity’s ability to provide music therapists and sessions to those who need it most, and has been the main fundraising event forNordoff Robbins Scotland since 1996, contributing phenomenal amounts to the charity.

Colin Banks, Head of Sponsorship at SSE said, “As a partner of Nordoff Robbins Scotland, SSE are proud to continue working in collaboration with the amazing charity, supporting them in making a meaningful difference to adults and children across the country. The SSE Scottish Music Awards is a wonderful celebration of our rich music and culture and we are delighted to return to support the 19th annual event.”

Donald MacLeod, chairman of Nordoff Robbins Scotland, said: “What a night! Every year, the SSE Scottish Music Awards exceeds all our expectations as we see the best of the Scottish music industry come together to support our charity and be more and more generous every year. We were delighted to present legends such as Alice Cooper and Ian Stewart’s wife Cynthia with their awards and we feel incredibly strongly about supporting Scotland’s up and coming musicians like Lewis Capaldi and Nina Nesbitt. The crowd saw some wonderful performances by all the acts and we couldn’t thank everyone enough for their support; it really does make a difference to people across the country who require music therapy and the support of our talent therapists. Here’s to 20th year celebrations in 2018!”

‘Outstanding Contribution to Music’ Sponsored by SSE
Winner – The Waterboys