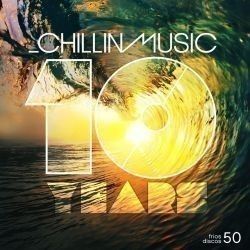 As things warm up, and can’t seem to get any hotter, one may be curious about a mysterious cool breeze that’s suddenly, refreshingly flowing through the air. To many this may be a surprise, but to the Chillin Music label who — by no coincidence — are celebrating their ten year anniversary, it was something they knew all along when they took the temperature of the dance climate and declared: “let there be chill.” They have the science of keeping it cool down pat and over their decade of releasing quality house music they’ve worked with some truly heavyweight artists. Until now, they hadn’t re-released any tracks or put together a compilation, but on this special occasion they present their first collection — 10 Years of Chillin Music. This new report, featuring some exclusive, unreleased tracks, looks to be just as equally refreshing to the dance community.

Among the highlights, label head Rob Slac gets the remix treatment from Birmingham’s Chris James (OFF, Get Physical) of Purple Velvet and Coat of Arms fame. Chris goes to work on “Shake & Freak,” applying his familiar signature sound with delayed and reverberating rim shots, claps, and metallic bells scattered about over deep, icey pads and a punchy, full bass line. Germany’s Marc Faenger, a Minus family member, takes a dubby, minimal techno knife to Mass Digital’s “2 Hearts 2 Souls” which he partitions off into sections of varying structure. Pezzner is a Seattle artist with a reputation that precedes him, known for taking listeners through figurative landscapes he’s released on labels like Freerange and Crosstown Rebels. On his remix of “Trains Over Broadway” by Whiskey Disco owner Sleazy McQueen, Pezzner entertains listeners in a disco jungle with guitar strings plucked like vines by a canopy of chattering animals and the rumble of tightly skinned drums. Things get a bit more tech on tracks like Dirt Crew’s smooth remix of “Again” by Pablo Boilvar and the bigger, harder efforts of Daypack Solo’s remix of Sasse’s “City Lights” and Ardalan’s (Dirtybird) original production “The Sea.”