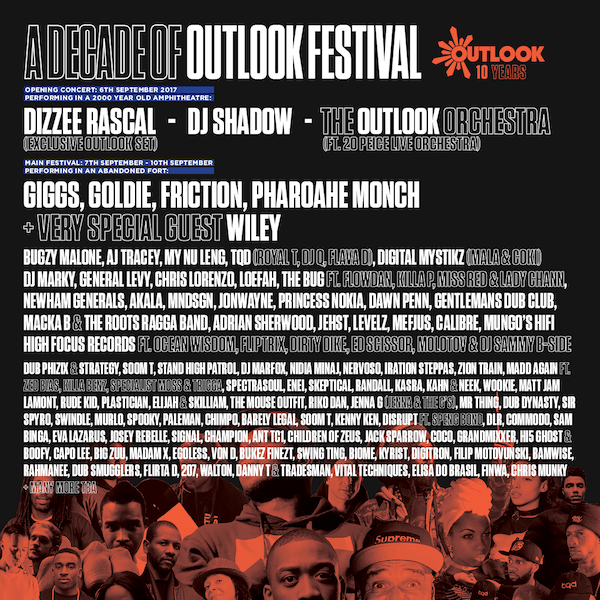 Starting as a 600 person convoy to Croatia in 2008 and now one of the leading bass parties in the world, Outlook Festival has been making history since day dot. A four day celebration of all things sound system related, the annual party unites breakthrough acts and founding fathers from the worlds of dubstep, jungle, dub, drum and bass, hip-hop, grime, garage and beyond. Between 6th-10th September 2017, Outlook Festival present a no holds barred lineup set to shake the walls of Croatia’s Fort Punta Christo, as the crew mark a decade in the game. Everyone from Dizzee Rascal, Dawn Penn, Swing Ting, Giggs, The Bug, Calibre, Goldie, LEVELZ, AJ Tracey, Wiley and Madam X play this highly anticipated birthday party, plus the new 20-person Outlook Orchestra performing at the opening concert, and much more. With tickets moving at a record rate and Outlook selling out faster than ever last year, these will not last long. Final early bird weekend tickets can be purchased for just £130 – SEE YOU AT THE FORT.

To kick off proceedings, each year Outlook Festival takeover Pula’s historic amphitheatre space for its revered opening concert, this year grime poster boy and icon Dizzee Rascal brings BOW E3 to Pula for a show around his anticipated new album. DJ Shadow joins with tripped out electronica, and fresh from the sellout success at London’s Southbank Centre; ‘The Outlook Orchestra’, a twenty piece orchestra ensemble reincarnating tracks by Outlook family General Levy, Newham Generals, Pharaohe Monch alongside a few secret surprises. Fix up, look sharp, tickets for this won’t be sticking around for long, and can be found here: http://www.outlookfestival.com/amphitheatre-concert/

Over 100 artists old and new take over the abandoned fortress and beach for what will be the most monumental Outlook to date. Representing for the grime camp is godfather of the game Wiley (plus Hollow Man) Giggs, Newham Generals (D Double E and Footsie) and acclaimed producers Champion, Spooky and Sir Spyro. Also flying the flag are veteran MCs Flowdan, Riko Dan, Flirta D, Killa P and Lady Chann joining young guns and Radar Radio affiliates AJ Tracey, Big Zuu and Capo Lee. The full Butterz crew are in attendance; bassline from TDQ, jazz influenced beats from Swindle and expert selections from label heads Elijah & Skilliam.

Outlook Festival’s foundations are cemented in dub and reggae, and there’s always a solid contingent repping. This year includes the expert on dub and selector extraordinaire Adrian Sherwood, plus a live performance from the nine piece Gentleman’s Dub Club. Fresh from a standout performance at the Outlook Orchestra, the queen Dawn Penn provides classic jams, whilst there’ll be more reggae explorations from Soom T, Stand High Patrol, Eva Lazarus, and Dub Dynasty. On a darker end of the dub scale is The Bug, who’ll push the custom systems to the limits, with the unmistakable sounds of Israeli MC Miss Red. Moving on to the dubstep tip, find rhythms from Deep Medi artist Commodo, Jack Sparrow and Rinse FM’s Plastician, plus Deep Medi boss Mala and Coki presenting Digital Mystikz. There’s plenty of bass to meditate on with Bristol’s finest selectors Kahn and Neek, with their Bandulu Records squad Hi5 Ghost and Boofy in tow.

An all-star selection of drum and bass makes up the Outlook programming this year, from Metalheadz royalty and Outlook familia Goldie, to DJ Marky and Good Looking Records boss LTJ Bukem. The September weekender also sees one of DnB’s finest producers Calibre return to Outlook’s stages, plus Critical Music heads Kasra and Sam Binga. Shogun Audio duo Spectrasoul make the journey to the Croatian shores, plus Elisa Do Brasil, DLR, Mefjus and with a whole host of MCs on board. It’s a must see affair for any DnB head looking for high tempo BPM.

Not forgetting a huge helping of hip hop,  both US and UK flavours that can be found across the four Outlook days. Stones Throw affiliate and Anderson Paak producer MNDSGN plays an Outlook debut, as well as label mate Jonwayne. Don’t forget to check out latino influenced R&B from breakthrough rapper Princess Nokia. UK hip hop comes from the likes of Mr Thing, Children of Zeus, Jehst, and The Mouse Outfit as well as soulful spoken word from Akala, as well as a huge High Focus Records take over featuring Fliptrix, Dirty Dike, Ed Scissor, Molotov & DJ Sammy B-Side.

Set in an abandoned fort on the stunning Adriatic ocean, the abandoned fortress which Outlook Festival calls home is the perfect setting for a party and holiday experience, giving the best of all worlds. With blissful sun, sea and a beach specifically for punters to relax between dancing all night long, it’s the ideal way to combine adventure and travel with the very best music you can find. With over 100 artists announced already, and much more still to come, don’t sleep on tickets to the decade celebration – it’s set to be the biggest yet.

Accommodation is flexible with onsite options including a well equipped campsite and mobile homes, or apartments are also available close by, and with excellent public transport throughout the area there are options for every need and budget, more info here: outlookfestival.com/accomodation. Flight options from the UK are to Trieste, Ljubljana, Zagreb, Pula, Venice Treviso and Venice Marco-Polo airports, with transfers to the festival site. Outlook Festival also organise coach packages and flight packages, all available to view / purchase at outlookfestival.com/travel/.

A lot can change over ten years, but Outlook Festival’s dedication, passion and ability has secured their place as one of the leading festival promoters worldwide. Though grown, the family feels the same, with artists and punters coming back year on year to experience and discover new music on world class, bespoke built sound systems. From the ambitious settings (we’ve all seen the speaker stacks in The Moat), to blissful boat parties, and the recent addition of the Opening Concert, the team have never shied away from taking things to the next level, whilst staying firmly grounded to their roots. Here’s to another ten. A DECADE OF OUTLOOK FESTIVAL – SEE YOU AT THE FORT!