TRNSMT: A new festival for Scotland! 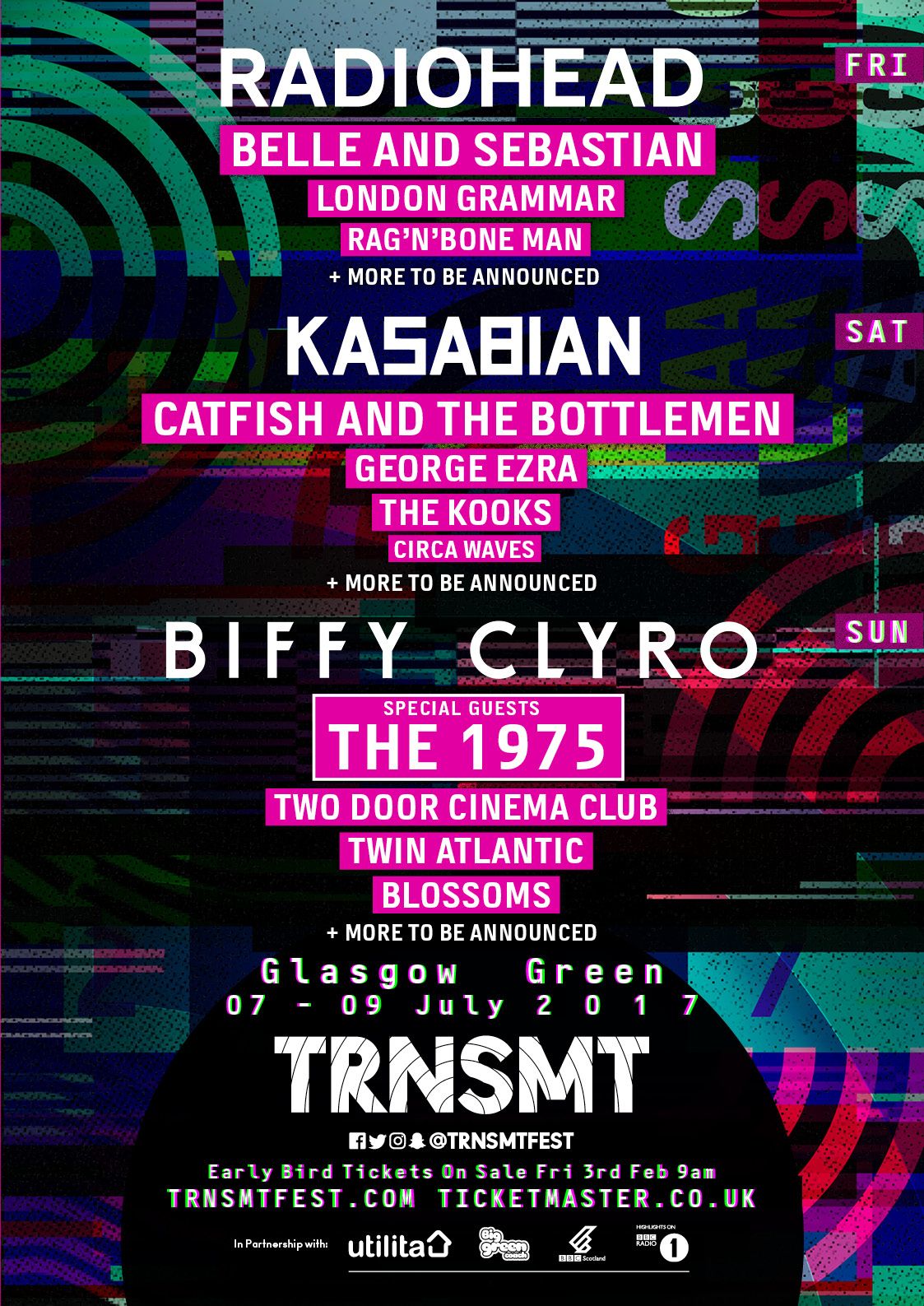 TRNSMT: A new festival for Scotland!

Today marks the announcement of an exceptional line up for Scotland’s newest and freshest music festival. Taking place at Glasgow Green from 7th – 9th July, 2017, TRNSMT will feature headline performances from Radiohead, Kasabian and Biffy Clyro. The 1975, Catfish and the Bottlemen, Belle & Sebastian, London Grammar, George Ezra, Two Door Cinema Club, Twin Atlantic, The Kooks, Blossoms, Rag‘n’Bone Man, Circa Waves and many more to be announced, form the line-up for one of the most highly anticipated music events of the Scottish summer. This truly award-winning line-up, with a mighty 72 BRITs, Grammy Awards, Ivor Novello and Mercury Music Prize award nominations bestowed to the artists on the bill, is unyielding in its quest to provide the greatest experience of the summer for music fans.

Glasgow Green will play host to this truly metropolitan, non-camping festival, which stages global superstars alongside the very best of local talent. Glasgow, the UNESCO City of Music and cultural and artistic hub, will provide the backdrop as TRNSMT interrupts Glasgow’s summer air with an electrifying celebration of music, bringing people together to enjoy the acts they already love, discover the new, and undergo life-affirming experiences.

Fresh on the heels of the release of their ninth LP, the critically acclaimed A Moon Shaped Pool, Radiohead make their return to Glasgow, playing on Friday 7th July. One of the most iconic and innovative bands in the world, Radiohead have evolved continuously since their inception, having created an eclectic back catalogue of albums and songs now widely regarded as classics. No other British band of the past 30 years continuously tops “Greatest Album Ever” or “Most Influential Artist” polls curated by fans and critics alike, are cited as influential to countless other bands of today, and have the unique ability to command respect from a live audience, no matter the scale of event they play. Radiohead last played Glasgow in 2008, so their return to the city in 2017, a year which has already seen them BRIT Award nominated for Best British Group, is long-awaited and highly anticipated.

Since the release of their self-titled debut album in 2004, Kasabian have gone on to become one of the biggest rock bands in the country and will headline TRNSMT on Saturday 8th July. They’ve continued to fly the flag for British guitar music ever since, releasing a further four critically acclaimed albums, all of which reached number one. Their new record will be released in the spring. The Leicester four-piece are known for their blistering live shows, with their unique blend of colossal dance beats and rock turning whole festival fields into dancefloors. Equally at home on the festival stage, in stadiums, arenas or in a small intimate setting, few bands can unify a crowd of thousands in quite the same way as Kasabian.

Biffy Clyro are three childhood friends from Ayrshire, Scotland who formed a band, delivered three albums of abrasive youthful exuberance and finally cracked the big time when their fourth – 2007’s Puzzle – hit the charts at number one. With a further three albums under their belt, they are now bona fide stars who can headline festivals, fill arenas and deliver hit singles in an era in which rock bands rarely trouble the charts. Currently nominated for Best British Group at this year’s BRIT Awards, Biffy Clyro’s evolution from the jagged post-hardcore of their early material to the huge alternative rock sound of recent years has won them a fervent and fanatic fan base, whose cries of “Mon the Biff!” will be heard for miles across the city when they headline TRSNMT on Sunday 9th July.

The 1975’s album I Like It When You Sleep, for You Are So Beautiful Yet So Unaware of It proved they were here for a long time, and a good time, topping the charts in the UK and US and becoming one of the defining albums of recent years. The band is nominated for Brit Awards this year including Best British Group and Album of the Year and will no doubt be one of the many highlights of TRNSMT on Sunday 9th July.

Welsh four-piece Catfish and the Bottlemen will play TRNSMT hot off the back of a world tour for their critically acclaimed sophomore album, The Ride, which saw their anthemic sound reach number one in UK album charts. TRNSMT’s Glasgow crowd will be sure to welcome the band on Saturday 8th July, as charismatic frontman Van McCann revealed his own love for the city on album track Glasgow, which fans will be hoping to hear this July.

Indie figureheads, Belle & Sebastian, bring their critically acclaimed back catalogue to Glasgow Green to join Radiohead on Friday 7th July. Emerging in the late nineties, part of the band’s appeal was their apparent obliviousness to fame, which they were thrust into in 1998 with the release of The Boy with the Arab Strap and their 1999 Best Newcomers Brit Award win. Their ability to share their affinity for culture in songs written almost personally to their fans is how they’ve become lovingly imprinted into the music industry today.

Artists also announced today, London Grammar, George Ezra, Two Door Cinema Club, Twin Atlantic, The Kooks, Blossoms, Rag‘n’Bone Man and Circa Waves, have amassed a number of award wins and nominations throughout their careers, from London Grammar’s Ivor Novello win in 2014 to Rag‘n’Bone Man’s Brits Critics' Choice Awards in 2017. The musical talent on offer at TRNSMT, led by Radiohead, Kasabian and Biffy Clyro, is the best of the best, the cream of the crop; from your new favourite to most-played artist, the line-up is yours to enjoy thanks to flexible early bird ticket packages.

TRNSMT will offer entertainment over two stages – with a line-up that will highlight talent across the musical spectrum, from the most influential band in fans’ lifetime to their favourite new, under the radar artist on the King Tut’s Stage – powered by Utilita.  Fans will enjoy music, arts, culture, bars and restaurants as they customise their individual festival experience across the 3 days.

Said Geoff Ellis, Head of DF Concerts, “We’re incredibly pleased to be bringing such a fresh, new festival to Scotland. TRNSMT will bring together the best in live music, from global acts to the best cutting edge artists on the King Tut’s Stage, powered by Utilita – against the iconic skyline of Glasgow. Over the next few weeks, we’ll be announcing the rest of the line-up, as well as all the additional experiences that TRNSMT will have to offer such as mouth-watering street food and a diverse offering of drinks. Stay tuned – there’s plenty more to come!”

Councillor Frank McAveety, Leader of Glasgow City Council and Chair of the City Marketing Bureau, said, “Glasgow lives and breathes live music. Our city has venues, events and – most importantly – crowds to match anywhere in the world. TRNSMT is already shaping up to be an exciting event that will add to that global reputation – and become a big date in the city’s summer calendar.”

We are also happy to announce that TRNSMT has officially partnered with Utilita Energy, the UK’s leading provider of smart Pay-As-You-Go energy, who will be the event partner for the King Tut’s Stage – powered by Utilita. Customers will also have access to a presale for TRNSMT.

Jem Maidment, Head of Marketing & Communications at Utilita Energy, said: “It is a great honour for Utilita Energy to partner with TRNSMT at the beginning of this exciting new era. We know just how important music is to this great city and we are convinced TRNSMT will further enhance Glasgow’s reputation for outstanding entertainment. We will be working closely with TRNSMT and look forward to revealing more of our plans over the coming months.”

The event is easily accessible with national and international transport links to and from Glasgow, as well as a wealth of overnight accommodation on offer throughout the city and surrounding areas. Early bird weekend and day ticket packages allow fans to carefully design their TRNSMT weekend experience with flexible options on offer – whether a 1, 2 or 3 day package is for you, you’ll experience some of the best musical talent around. VIP ticket packages are also available, offering access to the VIP area.

There will be a ticket presale at 9am on Wednesday 1st February for those who have signed up to the mailing list at www.trnsmtfest.com

Early bird tickets will go on general sale from 9am on Friday 3rd February from www.trnsmtfest.com and www.ticketmaster.co.uk

The official travel partner of TRNSMT will be Big Green Coach http://www.biggreencoach.co.uk/