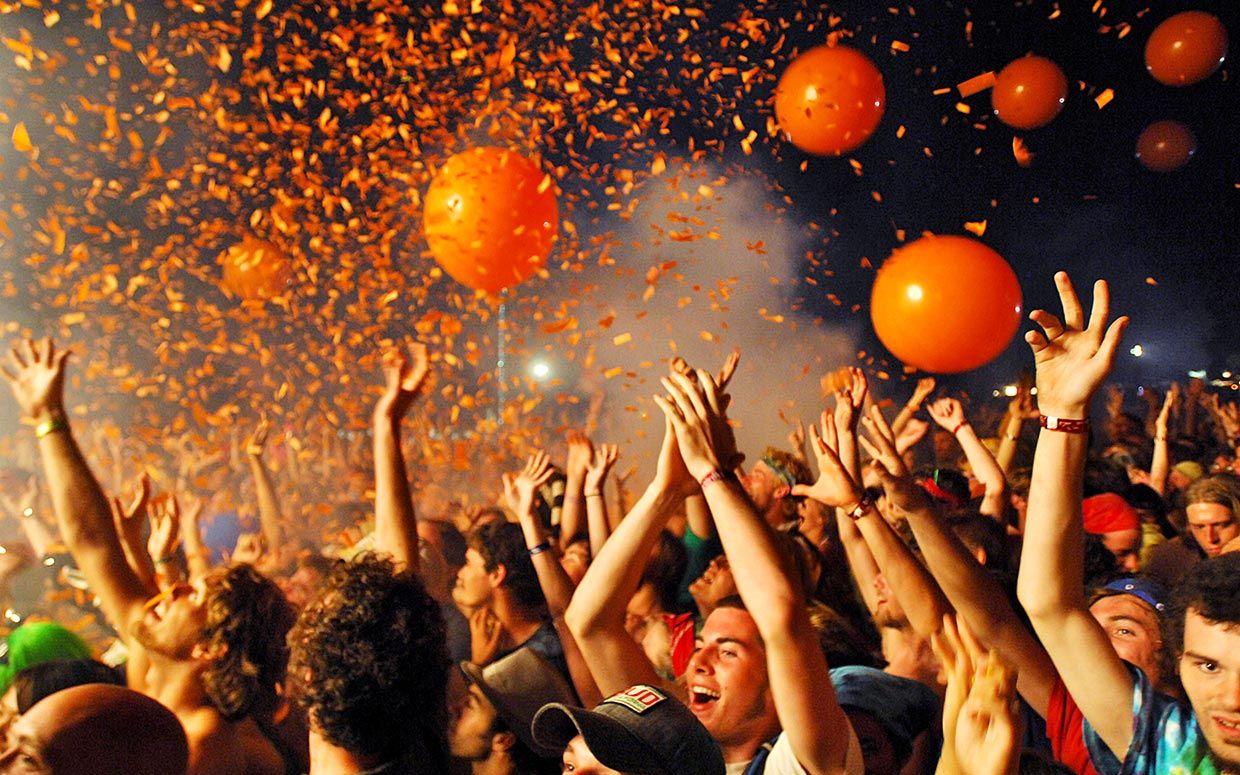 The global festival scene is thriving, with a diverse array of unique festival escapes in exciting new destinations. From mountain top snow festivals and exotic Moroccan escapes, to adventures in the Costa Rica jungle, wallet friendly Eastern European hotspots and amazing city festivals to combine with long weekends of culture, gastronomic delights and sightseeing, there’s something for every festival adventurer. Need some inspiration? Here’s 11 unforgettable festival escapes for 2017…

Located where beach meets forest and waterfalls in the jungle of Uvita, Costa Rica’, Envision Festival days are bursting with art, spirituality, yoga and education, whilst nights are committed to celebrating humanity through music, dance and performance. Offering an enticing mix of world music, dance music, reggae and live acts, the 2017 line-up includes Opiuo, Autograf, Rising Appalachia, Goldfish, Blond:ish and Acid Pauli. Envision also features an impressive lineup of top yoga instructors, including Envision Yoga Program. Director and former adidas Global Yoga Trainer Ashleigh Sergeant, plus inspiring talks from speakers including John Perkins, author of Confessions of an Economic Hitman and Burning Man Founders Crimson Rose and Will Roger Peterson. Envision is also 100% renewable and its focus on sustainable permaculture makes it one of the world’s leading green events.

RAVE IN AN IGLOO AT SNOWBOMBING, THE WORLD’S NO.1 FESTIVAL ON SNOW

Snowbombing. Where to start… Mayrhofen, Austria, that’s where. A festival up a mountain 8,497ft above ordinary, in one of the finest ski resorts in Europe, showcasing world class acts in the most unique venues imaginable (think igloo raves, enchanted forest parties and mountain-top stages). Luxurious spas, rooftop hot tubs, authentic alpine cuisine, 650km of unadulterated piste and not a tent in sight. Snowbombing 2017 promises to be the most ambitious event to date with a world-class lineup that includes Run The Jewels, Chase & Status, Dixon, Courteeners, Blossoms, Slaves, Novelist, Monki, Grandmaster Flash, KiNK, Groove Armada, Eats Everything, Cassy, Stefflon Don and many, many more. All this plus TV legend Pat Sharp is set to bring his FunHAUS to SB17! Now, alongside Mr Motivator, Eddie the Eagle, Chairlift Speed dating, Snowlympics and more, Snowbombing and Pat Sharp’s FunHAUS will host a superb array of alpine antics, including House of Voga, Bongo’s Bingo, the Zell Brass Oompah Band and a trio of tribute acts that includes Noasis, Antarctic Monkeys and Daft as Punk. Snowbombing 2017 – the ultimate music festival on snow.

MIX MUSIC, CULTURE AND GASTRONOMY ON A CITY BREAK TO BILBAO FOR BILBAO BBK LIVE

ENJOY THE PICTURESQUE WOODLAND SETTING OF POSITIVUS FESTIVAL IN LATVIA

Taking place in the picturesque coastal town of Salacgriva in Latvia,Positivus is the largest music and arts festival in the Baltic States, transporting chart-topping headliners, underground emerging talent and exciting art and dance stages to their unspoiled atmospheric coastal setting amid stunning woodland. Festival goers can dip their toes in the baltic sea or take in the atmosphere in a hammock beneath the trees while enjoying a rich diversity of international chart toppers and underground emerging talent in this idyllic holiday location. Positivus also offers art and dance stages giving festival goers a variety of activities and stalls selling locally made designer clothing and accessories, giving festival goers plenty to see and do during the 3 day event. Positivus was also recognised in the 2013, 2015 and 2016 European Festival Awards being a finalist in the ‘Best Medium Sized Festival’ category and also for ‘Best Festival Line Up’ in 2013. First acts for 2017 will be announced soon

DISCOVER THE BEST ALTERNATIVE MUSIC AT OFF FESTIVAL IN KATOWICE

OFF is a festival for the discerning music fan and the place to discover the best alternative acts from around the world. A truly unique boutique music festival, OFF Festival takes place in ‘Three Lake Valley’, Katowice – a beautiful green oasis in the heart of industrial Silesia. OFF is a way of life, one that flies in the face of current trends and stays true to itself, and the ethos of organiser Artur Rojek is firmly aimed at supporting art and music with the festival bringing many acts to Poland for the first time. OFF Festival’s reputation is growing year on year driven by the festivals forward–thinking, eclectic music policy and it’s bold and eclectic lineups. From the greatest alternative music stars from around the world to the increasingly strong Polish scene, OFF festival has inspiring music in abundance and the organisers and crowd have one serious finger on the pulse when it comes to music. This year will be more of the same with the first acts announced being Circuit Des Yeux, Kikagaku Moyo, Swans and The Black Madonna.

Proud winner of the ‘Best Major European Festival’ award in 2015 and 2011, and ‘Best Festival Line Up’ in 2016, Sziget Festival is one of the biggest multicultural events of Europe. Taking place on the picturesque Óbuda Island in Budapest, Sziget welcomes over 490,000 visitors from over 100 countries to express themselves on their self-proclaimed Island of Freedom. Sziget is not just about music, with more than 50 program venues offering festival goers the chance to experience many different things including; circus, theatre and dance, art and installations, yoga and sports and a huge variety of food. There is also has a beach area where fans can truly enjoy the summer and the Danube. With so much on offer in the heart of Budapest, Sziget provides a complete festival-holiday experience with a week long party, great live concerts and all the attractions the city has to offer such as beautiful historic buildings, thermal spas and special ’ruin pubs’. For their 25th anniversary edition Sziget are excited to welcome artists including; Major Lazer, Dimitri Vegas & Like Mike, Two Door Cinema Club, Tom Odell, Bad Religion, DJ Shadow, Mac DeMarco, Vince Staples, W&W, Oliver Heldens and many more tba.

Just a short distance from the city of Amsterdam, the world’s longest running dance music festival takes visitors on a creative journey, combining the finest electronic music with an extensive arts and culture line-up. With over 346 acts, criss-crossing house, techno, disco, African beats, vinyl-only, hardstyle, hip hop and feel-good bands, there’s something for every electronic music fan. The extensive lifestyle and culture programme also features theatre, movies, live art, interactive installation art, street performers, hidden raves in the forests and spectacular shows. At the Healing Garden, you can take some time to find your Zen and go back to the dancefloor feeling completely at peace and ready to dance through the entire weekend.

Nestled on the outskirts of the bustling city of Marrakech in the luxurious surroundings of the Source music resort, Oasis brings a slice of festival paradise to Morocco, shining the light on North Africa as the latest must-visit festival destination. In addition to the cutting-edge music programme, there is ample opportunity to nourish the mind, body and soul with daily yoga, massage and reflexology. Guests can also experience Moroccan culture on-site with authentic local street food, a wide selection of locally produced and organic products, market vendors, henna artists and more. With the ‘Red City’ of Marrakech just 10 minutes from the festival it’s also the perfect opportunity to explore the rich Berber, Arabic and Moorish culture, historic sights, desert landscapes, souks, spas and aromatic cuisine.

IMMERSE YOURSELF IN ELECTRONIC MUSIC CULTURE AT THE AMSTERDAM DANCE EVENT

Amsterdam’s thriving club and nightlife scene is well documented and for 5 days a year the city becomes the centre of the electronic music world as over 375,000 visitors flock to the city for the Amsterdam Dance Event. The ultimate music festival for fans of electronic music takes place in October, featuring more than 2,200 international artists performing in more than 100 of Amsterdam’s most celebrated venues including Melkweg, Closure, Gashouder, Claire, Shelter, Paradiso, the NDSM Docklands and De School. In addition to the extensive line-up of the ADE Festival, ADE also offers music enthusiasts a large and varied daytime program featuring a wealth of dance music-related exhibitions, films, documentaries, DJ showcases, gear master classes and artist Q&A’s, taking place across Amsterdam’s five main districts, utilising historical locations and unique venues across the city.