120,000 Music Fans Enjoy The Weekend Of A Lifetime At Glasgow Green For First Ever Trnsmt Festival!a 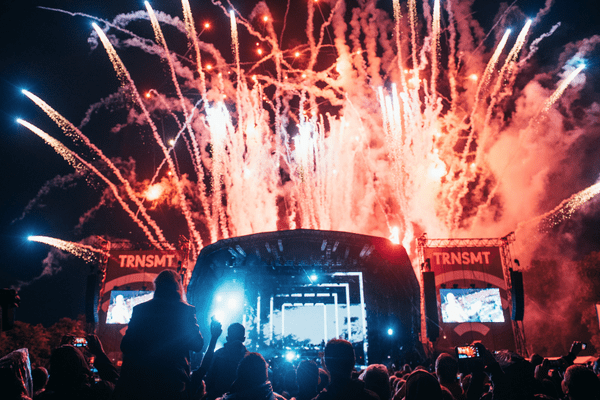 120,000 Music Fans Enjoy The Weekend Of A Lifetime At Glasgow Green For First Ever Trnsmt Festival!a

Headliners Biffy Clyro plus The 1975, Twin Atlantic, Blossoms, The View and many, many more keep the crowd buzzing for final day of TRNSMT

Local heroes and international rock superstars Biffy Clyro and The 1975 topped off an unforgettable weekend of music at Glasgow Green tonight as the inaugural TRNSMTfestival came to a triumphant close.

The View were first on the Main Stage and thanks to frontman Kyle Falconer’s bright sunshine yellow dungarees, the weather stayed clear for the thousands of early fans who turned up to see the Dundee rockers. The crowd were revved up for the entire set – which was packed full of hits including opener ‘Grace’ and ‘Wasted Little DJs’ – and as the band kicked into ‘5 Rebeccas’ the crowd echoed the famous ‘The View are on fire’ chant. Finishing with ‘Same Jeans’ and ‘Superstar Tradesman’, fans sang the entire opening verses in unison, creating one of the weekend’s many highlights.

Anteros packed out the Jack Rocks Stage with their indie-disco vibes as The View finished their set. The female-fronted band delivered a mesmerizing, high-energy performance that saw singer Laura Hayden command the stage with her signature Debbie Harry vibes.

Vukovi put on an energetic performance over on the King Tut’s Powered by Utilita Stage, bringing good vibes to the final day of TRNSMT. Singer Janine Shilstone dressed up for the occasion in a mermaid style outfit and delivered a career-defining show for the Glasgow crowd. During the set she jumped into the crowd, borrowing a crown from a fan and fashioning it on stage. The band well and truly had the crowd in the palm of their hands, belting out rocking tune after tune.

Lewis Capaldi is already reaching millions of music fans around the world with the now viral tune ‘Bruises’ and as he played to the vast crowd over on the King Tut’s Powered by Utilita Stage, the Scottish singer-songwriter was awe-struck at the reaction. Speaking to TRNSMT after his performance he said:

QUOTE: Lewis Capaldi: “TRNSMT was more than I could have ever hoped for. I was absolutely shitting myself beforehand so to walk out and see that many people and hear them singing every word was fucking mental. Best gig I’ve ever played!”

Blossoms dedicated break-up tune ‘My Favourite Room’ to TRNSMT reveller, Michelle, in the crowd, before going into a cover of ‘Last Christmas’. Frontman Tom Ogden’s honey-vocals then belted out the last track of their set, ‘Charlemagne’.

Homegrown heroes Twin Atlantic opened their set with a powerful wail of guitars and a showering of confetti as the crowd’s roars and screams echoed around Glasgow Green. When the band began to play ‘Brothers and Sisters’ mid-set it was clear to all that Twin Atlantic are firmly in the hearts and souls of the Glasgow crowd.

Next up, Two Door Cinema Club delivered a set of festival anthems including ‘Undercover Martyn’ and ‘What You Know’, encouraging the crowd to bounce in a sea of happiness. Their early evening slot on day 3 saw the crowd erupt, chanting along to the tunes and showing the band just why Scottish audiences are the best in the world.

With one of the most impressive stage productions of the weekend, The 1975 took the penultimate slot on the Main Stage, playing to a huge crowd of adoring fans as darkness crept in over Glasgow Green. “We don’t need sunshine” shouted a topless Matt Healy, who certified his frontman credentials with a politically-charged and charismatic performance. Kicking off with the humongous hit, ‘Love Me’ parading around the stage, the band played a wealth of crowd-pleasers including ‘Change of Heart’, ‘Somebody Else’, ‘She’s American’, ‘Falling For You’, and ‘Loving Someone’. The latter preceded a speech from Healy about equality as he said, “We are all human; we are just like you, man. This song is about loving someone. Let’s have our own little pride here in Glasgow. Let’s change the world, ladies and gentlemen.”

With the crowd suitably warmed up, hometown heroes Biffy Clyro took to the stage proclaiming, “This is biblical, do your worst Glasgow!” before launching into a massive set rounding off what has been the perfect weekend for the festival’s first year at Glasgow Green.

Biffy Clyro are forever progressing as a band and their live performance continues to grow in stature and energy. Tonight’s headline show at TRNSMT was no different, as streamers fired into the crowd with opener ‘Wolves Of Winter’. Topless, with Simon wearing sequin silver jeans and their signature rock ‘n’ roll style firmly intact, the band remained elated throughout the show, blasting hits such as ‘57’, ‘Bubbles’, ‘Mountains’ and ‘Machines’ to an adoring Glasgow crowd. Encore ‘Jaggy Snake’, ‘Folding Stars’ and ‘Stingin’ Belle’ closed proceedings with fireworks lighting up the TRNSMT sky. A band that are no stranger to big stages around the globe, Biffy Clyro were determined to bring TRNSMT to the ultimate close tonight, pulling out all the stops for Glasgow.

QUOTE: FESTIVAL DIRECTOR, GEOFF ELLIS: “The first ever TRNSMT festival has exceeded all our expectations. With 120,000 music fans enjoying sets from headliners Radiohead, Kasabian, and Biffy Clyro in Glasgow Green, it’s been a truly amazing weekend with an electric atmosphere come rain or shine. Thankfully, the sun shone for most of the weekend but with an incredible energy around TRNSMT the weather didn’t matter Thank you everyone!”

Across the weekend, 120,000 TRNSMT fans enjoyed 3 days of incredible music, with 109 acts performing across 5 stages, including headline slots from Radiohead, Kasabian, Biffy Clyro and The 1975.  Alongside a host of performances from up and coming musicians on the King Tut’s Stage Powered by Utilita and Jack Rock’s stages plus live DJ sets in the Smirnoff House, curated by Mixmag, TRNSMT is Glasgow’s newest perfect weekend.

Police Scotland have reported 10 arrests across the event, all for minor incidents, and have praised festivalgoers for their positive attitudes and behaviour.

Over the weekend, there were a total of 92 people presenting to the onsite hospital tent for a variety of minor complaints, including strains and sprains, weather-related issues and pre-existing medical conditions.