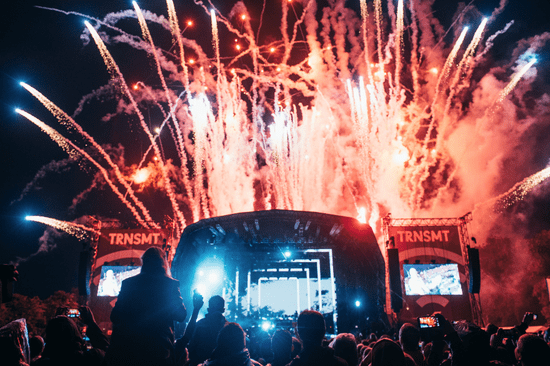 After the hugely successful inaugural TRNSMT Festival, organisers DF Concerts & Events have announced that tickets for the 2018 TRNSMT event (6th – 8thJuly, Glasgow Green) will go on sale on Friday 14th July at 9am.

After over 120,000 fans had an amazing weekend at the Glasgow Green site, enjoying headline performances from Radiohead, Kasabian and Biffy Clyro, TRNSMT is delighted to reveal that three day tickets for next year’s festival will be available at 2017 prices, for a limited time period, and can be reserved for a £30 deposit*

With the sun shining on Glasgow for most of the weekend, TRNSMT fans were not only treated to incredible headliner performances from Radiohead, Kasabian and Biffy Clyro, a host of terrific names shaped TRNSMT into what is now being hailed as a truly outstanding event in the UK’s music calendar. Local heroes Belle & Sebastian brought the good vibes as they performed their biggest-ever Scottish gig on Friday, whilst hit maker Rag ‘N’ Bone Man brought the sunshine and the sing-alongs to Glasgow Green.

Catfish and the Bottlemen had the crowd bouncing in an iconic career-defining show on Saturday, and Stormzy who proved just why he’s the hottest name in the grime scene right now. On Sunday, confetti rained down on Twin Atlantic’s as the Glasgow band delivered a high-energy performance, plus Manchester superstars The 1975delighted ecstatic fans with their tune-laden stint on the Main Stage.

A total of 110 artists played TRNSMT, with performances taking place on the Main Stage, King Tut’s Stage Powered by Utilita Energy, Jack Rocks, #SmirnoffHouse, and the Utilita Tree. Glasgow was abuzz as TRNSMT took over the city for the weekend, with huge after-parties happening across the city each evening.

Festival Director Geoff Ellis said: “We couldn’t be more delighted with how TRNSMTwas received this year, we’ve been overwhelmed by the feedback from fans who are eager to return next year.

“To show our commitment to TRNSMT being firmly at the heart of the Scottish music calendar, we’re delighted to announce that tickets are on sale this week, so that music fans can put TRNSMT firmly in their summer music plans for 2018. We look forward to delivering another incredible weekend of outstanding music to music-lovers next year.”

“Music, art and culture are also vital to the city’s tourism and leisure industries, which support tens of thousands of jobs across every neighbourhood.

“With TRNSMT confirmed to return to Glasgow Green in 2018; I want to see the local community continue to be involved and to benefit from its continued success.”

Early Bird special – 3 day ticket available at 2017 prices
Secure your TRNSMT 2018 weekend ticket NOW for just £30 deposit – guaranteed at 2017 prices.
Available via: WWW.TRNSMTFEST.COM
*£30 deposit can be used against any ticket type, at prevailing prices, once line up is announced. T&Cs apply.
No Under 5s – Under 18s must be accompanied by an adult aged 21 and over