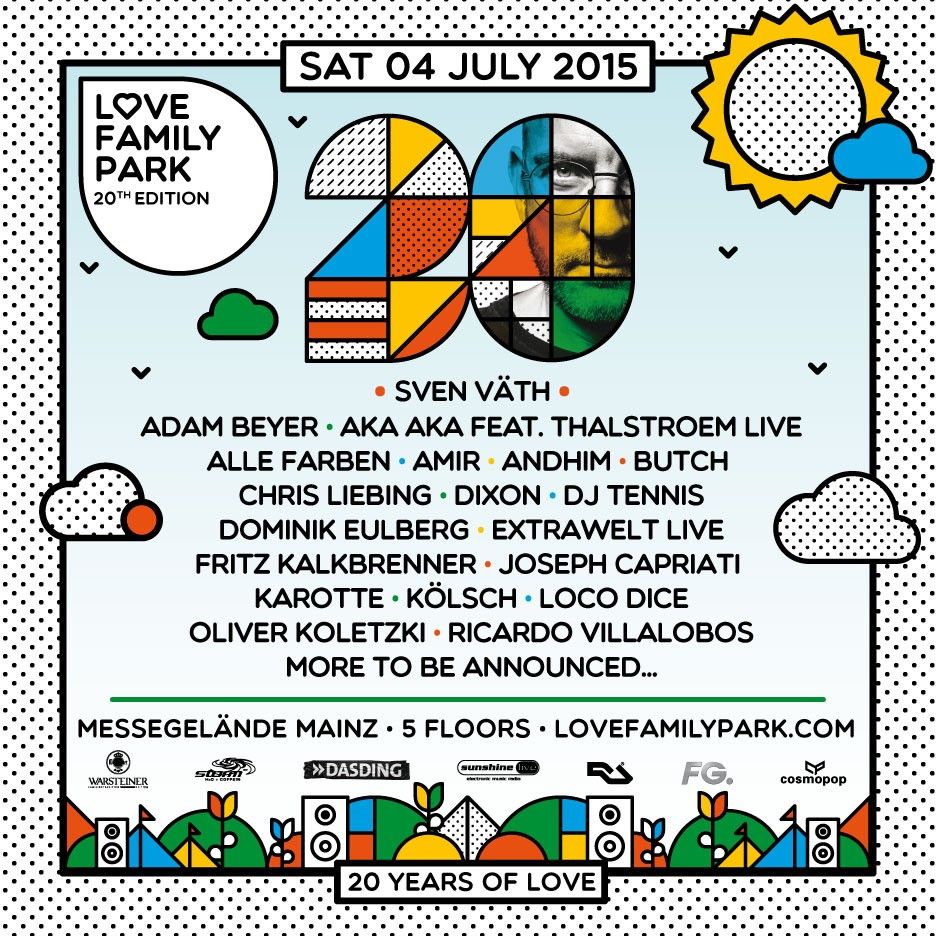 230 hours of sunshine, 15000 minutes of music, 300000 visitors from 30 nations, 15000 million dance steps: That’s “20 Years of Love”. The Love Family Community celebrates its 20th anniversary. For the first time on a Saturday, the first time on five floors and more than 20 international artists. Once again the Mainz Messepark in Germany, in the heart of the Rhine Main Region, will be turned into a green techno oasis.

An open-air promenade with a view to the vast “Vortaunus” region; in the middle of a green  oasis;  in  Mainz,  the  capital  of  Rhineland-Pfalz:  we  are  talking  about  the  Love Family Park venue, Mainz Messepark.  For the second time running it will be held here.  A perfect location with ample parking, first class public transport links (ÖPNV) and fast links to Frankfurt Airport for our international guests.

As with the site’s premiere in 2014, an area equivalent to two football pitches will again be laid with fresh lawn turf.  Visitors can discover the different plateaus of the site.  Once the guests have danced through our programme from floor to floor, they will learn that the Love Family’s anniversary includes 3 open air stages, as well as two tent stages – one more stage than previously.

For the big birthday party, alongside the Papa of the family, Sven Väth, many others will be joining in the congratulations. In alphabetical order:

Big events bring big changes: the family reunion has been celebrated 19 times on the nicest Sunday of the year. In 2015 it will become a weekender. For the first time, for its 20th anniversary, the event will fall on a Saturday. The benefit will be an entire weekend with  warm-up  parties  and  after-parties  –  a  never-ending  party.  After  all,  such  an anniversary deserves to be celebrated.

The sought-after Early Bird Tickets have sold out. Those who don’t want to miss out, need to be quick. In addition to 12 hours of music, lots of sunshine and of course good spirits,  the  ticket  includes:  discounted  entry  to  the  pre-parties  and  after-parties throughout the Rhine Main region, free arrival and departure within a 150km radius on local public transport networks (RMV, VRN & RNN), as well as a shuttle bus from Mainz main train station to the festival site and back.