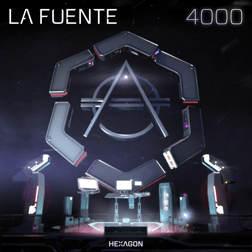 La Fuente has been rocking stages around the globe for more than 14 years, armed with his unassuming charm and a signature mix of todays dance music. By now, his name is a trademark for Dutch house music, having played at the most renowned festivals, releasing his productions on labels like Spinnin' Records, DOORN and Mixmash.

Last year, this led to perhaps his biggest hit to date: 'Selecta'. Released on Spinnin' Records, the track was played by a huge range of DJs, including Tiësto, Hardwell, Dimitri Vegas & Like Mike, David Guetta, Martiin Solveig, Oliver Heldens, Diplo, Laidback Luke and many more. And now, he's returning with another mindblowing tune.

'4000'
Playing different sets all around, La Fuente has also released different kinds of records throughout the years. This time round, he's focused on the festival crowd, giving it all he's got with a true house gem!

"Every show I play asks for a special approach. Playing the Ibiza beach during the day is something else than closing a festival. As I like to respond to these different situations, I carry a lot of music with me, and also produce a lot of varied tracks. This record was made with the future in mind, hence the title '4000'. It sounds new, fresh, and it's been a welcome addition during my sets in full clubs and cool festivals. That's why I also think it connects well with the HEXAGON label –  a bit futuristic, but also classic dance floor music. I like it when these things come together!" – La Fuente