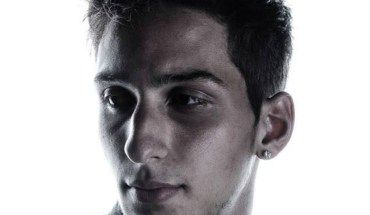 18 year old wonderkid, Acejax, is without doubt one of Greece's most exciting exports in recent times.  In his fledgling career to date, the talented DJ and producer has already amassed an ever-increasing army of fans due to his energetic and electrifying sets as well as his undoubted ability to create truly party-rocking tracks. His talents have already seen him tour South America and share stages with giants of the EDM scene such as Dimitri Vegas, Like Mike, Skrillex, Steve Aoki and Afrojak.

We caught up with Acejax to find out a little more about him and what he’s been getting up to.

Hi Acejax, how are you and what’s going on in your world at the moment?
I’m pretty good at this moment. Lots of things are going on! I’m preparing a couple of label releases that are coming out soon and always working on new music which I think the fans are going to love. I’m also preparing for a couple of shows in the States, South America and Europe!

How would you describe your sound?
Hmm, a good question. I would describe my sound as having a mix of progressive-electro house with an influx of pop and hip hop. I try to keep my music as innovating as possible but also with a certain catering to the wants of the people who listen to it. I try and keep my sets as creative as possible and I always try and give something local back to the audience in whichever country I’m in.

Who were your influences growing up?
Production-wise, my influences were Steve Angello, Armin, Paris & Simo, Dimitri Vegas & Like Mike and most importantly Tiesto. For my sets, a major inspiration was Diplo & Skrillex as I just love how creative and different their sets are each and every time.

How did you get involved in the Dance music business?
I started by playing in a small club called B4 in Montreal with a couple of friends, playing mostly Latin music and dance hall. After that, I started by ghosting for other producers until I met my manager and that’s when all the major shows started coming in; touring with Dimitri Vegas & Like Mike, Afrojack, Steve Aoki and the Nervo Sisters. That’s when I started to really focus on my own music.

Where would you like to see yourself in the months ahead?
I would be happy to see my releases be released on time! (Laughs)

Your latest releases include ‘Started From The Bottom’ and ‘Hit Me’. How have the records been received by your fellow DJs and are you happy with the success of them?
It’s been phenomenal! Artists like Hardwell and Ummet Ozcan have been playing them in almost all their sets. I’m pretty happy! I’m excited to show my new music even more though!

If you could choose, who would you like to collaborate with?
The Chainsmokers and Skrillex.

Tell us something not many people know about Acejax?
I like to read books.

Anything to add/shout outs?
Shout out to the entire Acejax team, we’re a huge big family. Shouts to Cetana, who we have a sick collaboration with coming soon, and shouts to Luca Testa and Housetwins, both of whom we’ll be releasing music with in the coming months.