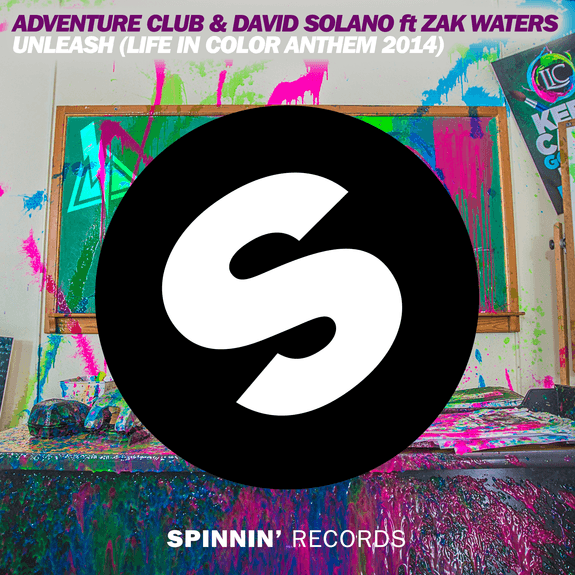 Adventure Club and David Solano have been no strangers to the Life in Color scene over the years, and now, they are teaming up to bring life to the world’s largest paint party in the form of ‘Unleash’ – the official 2014 LIC anthem! Set for release on Spinnin’ Records on April 2 and featuring the unforgettable vocals of rising artist, Zak Waters, co-writer of “The City” with Madeon, you can hear ‘Unleash’ right now for the first time in the LIC trailer below:

Spinnin’ and Solano are back on board for the second time in as many years for the official LIC anthem, and after the success of last years hit with R3hab, titled, ‘Do It’, LIC are once more showing the love to their fans with yet another monster collaboration. LIC Co-Founder, Lukasz Tracz said:

“We are very excited to release the LIC trailer to all of our fans and especially lucky to have had Adventure Club, David Solano and Zak Waters come on board to contribute to our official anthem, ‘Unleash’. It was so simple to work with such creative talents on the project and after hearing the result, it’s clear they’ve created a banger! We wanted to do something outside of the box this year and when we added Zak on to the track, it really gave it that ‘feel good’ vibe that we thought our fan base would be looking for. We wanted them to feel like they could relate to the story behind the Life in Color movement and with this trailer, we feel like we have done that. I’m sure it will have all of our fans singing along during our thousands of paint blasts throughout the coming year!”

Drifting away from their customary sounds, Solano, Adventure Club and Zak Waters have come together to create a truly blissful record full of anthemic and euphoric notes that every Life in Color goer has become accustomed. With Waters’ powerful vocals backing up the chorus, percussion echoes streamlining the top, and an exhilarating drop bringing it all home, there’s no question that this is set to be not only the anthem of LIC, but also a regular on the festival circuit all year round. Check out the preview of the track on SoundCloud before its release next month here!

The Life in Color tour has become one of the most celebrated stories in the festival world, and after 100+ sold out shows in 2013, is now set to expand to over 20 news countries for 2014. Having sold out over 25,000 tickets across three stages at Sun Life Stadium in 2013 with the likes of Calvin Harris, Chuckie, Steve Aoki and Headhunterz headlining, LIC are proud to announce they will be returning for a repeat performance this coming December 2014! Be sure to be a part of the ‘Unleash’ and Life in Color experiences over the coming months at the following dates, and stay tuned for the announcement of Phase 2 dates soon!