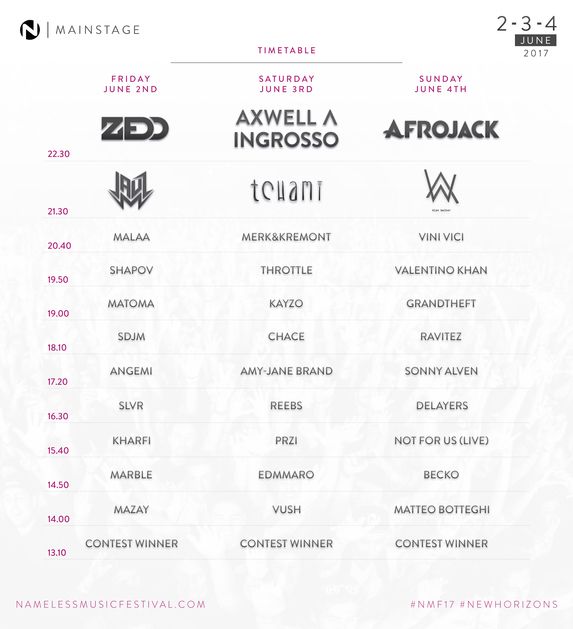 Landing in the picturesque North Italian town of Barzio for its fifth annual edition on June 2-4, Nameless Music Festival – Italy's leading electronic music festival – has announced its full MainStage line up. Boasting a schedule filled with some of the largest international and local artists across the musical spectrum, this year's edition is set to be the biggest to date, with capacity increased to 30,000 people.

Zedd, Axwell /\ Ingrosso, Afrojack, Jauz, Tchami and Alan Walker are just a few of the superstar acts that will be heading to Via Fornace Merlo to grace the MainStage for an unforgettable weekend of music. Italy's finest hip-hop acts, including names such as Ghali, Vegas Jones and Madman, will be performing on the Arc Stage, further reinforcing the Nameless team's passion for showcasing the finest homegrown talent. Keeping up with the festival's rapid growth in popularity, the event has introduced a third stage. The details of this stage are yet to be announced, but make sure to keep up to date with all the NMF socials for more information on this exciting addition.

With every genre across the electronic music space represented by the biggest acts on the planet, Nameless Music Festival 2017 is not to be missed.

Tickets for Nameless Music Festival are now on sale at namelessmusicfestival.com. With early bird tickets sold out for the main event already, fans will have to be quick in snapping up the remaining 3 day event tickets at €65. VIP tickets are available for 3 day access to the event at €99 per person. For those looking to attend one day only, Nameless Music Festival are also offering one day general admission tickets from €35 a day.

Nameless Music Festival also has a range of ticket packages:

All tickets for Nameless Music Festival are now on sale exclusively at namelessmusicfestival.com