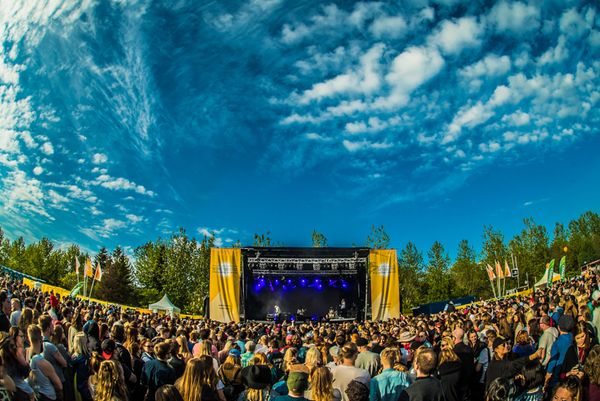 With the fourth edition of Secret Solstice shaping up to be one to remember this summer solstice weekend, June 16-18, 2017 in Reykjavík, Iceland, organizers have announced a special bonus for ticket holders in the form of an opening ceremony with some truly formidable guests. Extending the festivities, ten-time GRAMMY winner and Queen of Funk, Chaka Khan will be joined by Icelandic acts SSSóland Fox Train Safari for this extraordinary event on Thursday, June 15th, 2017, the day before the full festival was scheduled to begin.

In addition, as has become something of a tradition for Secret Solstice since 2015, an unannounced secret guest will also be scheduled to play the festival’s 2017 opening ceremony. While the act won’t likely be revealed until the day of the ceremony, the previous two years has seen Busta Rhymes and Sister Sledge filling this slot for the event.

Finally, Native American and Basque Gypsy artist JoaqoPelli, hailing from the USA, will open and bless the downtown Reykjavík event site before festivities begin, in what will be a magical way to kick off Secret Solstice’s 2017 event.

With an already stellar lineup including the Foo Fighters, The Prodigy, Rick Ross, Big Sean, Anderson .Paak, and many more, Secret Solstice’s opening ceremony on Thursday, June 15th, will come at no extra for existing ticket holders (including VIP and other higher level tickets), or those purchasing a full festival ticket in the future. However, for those wanting just to attend just this opening ceremony event, a super-limited number of 2,000 tickets will be available to the public. Going on sale at 11am GMT on April 13th, guests can purchase tickets to jive with Chaka Khan and the rest of the announced acts for only $52 USD (approx. £42/€49/5,900kr) while they last via Eventbrite.