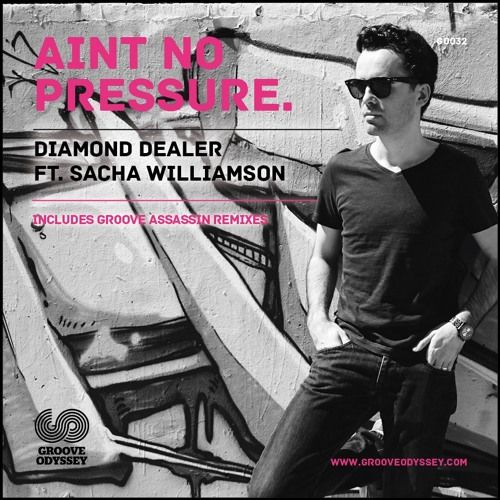 Inspired by the deep afro house sound played in DD’s homeland, South Africa, ‘Ain’t No Pressure’ fuses together the soulful keys and vocals of Sacha Williamson, minimal drums and a groove stripped right down to give space to each of the track’s ‘deep house’ elements. As DD enthuses ’It’s a mix of deep afro house and soul, with a techy bass that joins everything together’.

With Remixes to come from Groove Assassin on ‘Ain’t No Pressure’, this is a modern day deep house classic in the making.

Diamond Dealer is a music producer and international DJ. born in Kimberley, South Africa, who featured as an official match time DJ at the FIFA 2010 World Cup in South Africa, one of the country’s biggest events.

Currently living in Montpellier in the south of France, DD, as most of his fans call him remixed Nick Holder’s “Time” featuring Sacha Williamson last year, which was supported by DJs like Roger Sanchez, and this new song marks their growing partnership. Remixing for top labels such as Defected and Soulcandi, DD’s reputation is growing and aside from his DJ-ing & Music producing, he also runs the Brilliant Cut Media record label, which has released two albums – ‘The Diamond Collection’ with DJ Kent in 2009 and DD’ artist album debut ‘The One’ in 2011. DD is definitely one to watch

Diamond Dealer regularly tours in his homeland South Africa, as well as playing in Europe and Asia in countries such as France, Russia, Indonesia and South Korea.

Most South Africans know Diamond Dealer as the DJ from Bloemfontein, where he started his career, playing deep african house music at underground student events and in the townships, soon creating a buzz as a sought after DJ headlining events with the likes of Black Coffee, Culoe de Song and DJ Kent.

‘Ain’t No Pressure’ by Diamond Dealer featuring Sacha Williamson is the new deep house release from Groove Odyssey out November 23rd. All info at www.grooveodyssey.com