After the success of her debut single ‘Higher’ on label of the moment, Perfect Havoc in March this year; one of London’s most fashionable and energetic DJs, Alexis Knox brings the smile inducing energy once again with her follow up single ‘I Can’t Get Enough’, featuring Brit School graduate EVALINA on 27th November. Nearing 1 million streams globally, support from Spotify’s New Dance Revolution and peaking at #3 in the iTunes UK Dance Chart, ‘Higher’ was a debut success. Add in 10-years’ worth of DJing around the globe and Knox is now ready to follow suit with second single delivering more high energy piano house, mixed with EVALINA’s luxurious vocals that make this track so damn catchy.

For over a decade Alexis has worked alongside the biggest names in popular music, outside the recording studio, as an in-demand fashion stylist, revamping the looks and styling tour wardrobes for music’s most edgy personalities including Miley Cyrus, Little Mix, Charli XCX, Rita Ora, Bruno Mars and many more. After establishing herself as the go-to for cutting-edge fashion, she’s now sets her sights to establish herself as an equally in-demand music producer and tune selector.

While female DJs and producers are now more fairly represented in the underground, there are still none crossing over to enjoy mainstream success with their dance music productions. Alexis’s ambition is to redress the balance.

Prior to the COVID-19 pandemic, Alexis’s up-front DJ sets of party-starting house music were regularly heard across London at her residencies, Popcorn at Heaven, and at Harpies – two of the most vibrant LGBTQ+ nights around – and in guest spots at the iconic HE.SHE.THEY including when it touched down at the seminal, Ministry of Sound.

Her diverse and open approach has seen Alexis travel the world from Tokyo to Rome veering from Fashion Week events and exclusive parties to underground raves. A colourful and exuberant DJ schedule can include being Charli XCX’s tour DJ, getting down and dirty with festival crowds at Milkshake and Mystery Land, to rocking the dancefloor at Club NYX in Amsterdam and even taking to the turntables for a Katy Perry party in an L.A penthouse.

Alexis remains in demand for her innate fashion sense and demand for her musical skills crosses both worlds, with brands from Google to ASOS and Lacoste to Converse asking her to play their launch parties or curate hotly anticipated playlists.

Joining Knox in this all female set up is 22 year-old UK singer-songwriter, EVALINA who first came on the scene earlier this year with her top vocal performance on Alfie Cridland & Paul Kay’s ‘Last Day In Paradise’ on Perfect Havoc. With that single, the newcomer achieved #35 in the Capital Big Top 40 Charts, #5 in the UK iTunes Main Chart and #2 in the UK iTunes Dance Chart.  The future is bright for this talented young star.

‘I Can’t Get Enough’ marks yet another standout release for Perfect Havoc. Its breaking talent roster includes Joel Corry, Tobtok, Karen Harding, PS1, The Aston Shuffle, Mahalo, Just Kiddin and Parx. The label has hit half a billion global streams, has three UK Top 10 singles, and currently holds the record for the longest-running UK No.1 single in 2020 with Joel Corry & MNEK ‘Head & Heart’. The label A&R’s have an acute ear for both underground and mainstream hits, licensing to labels including Atlantic Records, Big Beat, Columbia Records, RCA, Ministry of Sound, Polydor, Toolroom, Thrive and Astralwerks.

With support from Spotify UK New Music Friday and The Dance List, plus Breaking Dance and New In Dance on Apple Music, ‘I Can’t Get Enough’ is off to a flying start. Stream it now via Perfect Havoc across all platforms https://alexisknox.lnk.to/icantgetenough 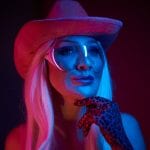 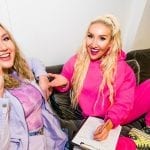