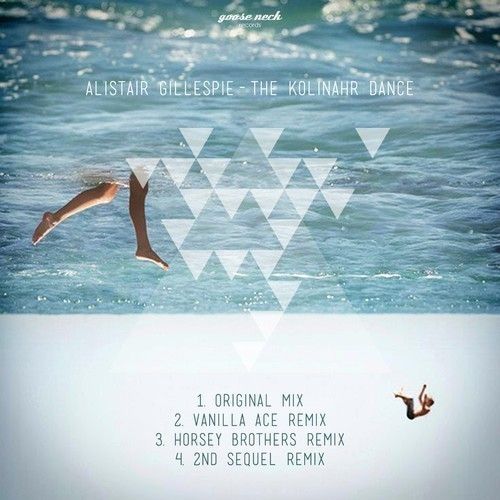 The wait for the latest instalment from Alistair Gillespie is nearly over. After the success and widespread support of his ‘Wandering Bear’ EP, including the deep and dirty ‘Park Ranger’ remix by Trav & Volta, Gillespie returns with a fresh four-track cracker, due out on Gillespie’s own Gooseneck imprint on Monday, December 23rd.

The ‘Kolinahr Dance’ EP features the title track, plus remixes from Vanilla Ace, Horsey Brothers and 2nd Sequel. For the original mix, Alistair imbues deep and thoughtful vibes that collide with a more direct, intense bass, offering plenty of bounce and a snare which provides just the right amount of bite. With claps aplenty and vocal flicks fizzing, percussive rhythm controls the stripped-back breakdown and pensive keys build to an impressive second drop.

Next up is Vanilla Ace’s mix, which comes with all the energy we’ve come to expect from the West London producer, who is currently making waves in the industry. A plucky bassline, oozing with self-confidence and teased by intermittent chord stabs, along with off-key percussive flickers, keeps the rhythm moving. Vanilla Ace was hooked as soon as he heard ‘Kolinahr Dance’ and was keen to put his own spin on the original. Well into his debut US tour, Vanilla said he just had to make a mix of the groove that could be woven into his own inimitable DJ sets.

Manchester-based Horsey Brothers’ mix has a classic Chicago feel with 909 drum sounds, while dreamy keys float in and around the subtle groove. A short open hi-hat cuts through the mix, keeping plenty of space between the harmonious elements. This track resets the coordinates in time for the last mix by Italian wonderkid, 2nd Sequel. New synths wrap the now familiar keys in a warm embrace and the chubby bass tugs at the soul in this expansive finale. A euphoric vocal sample comes and passes, just out of reach. In his own words, his version is “nothing over the top, just simple and cool.”

The composition of the EP has a great balance, with a range of collaborators lending from their wealth of individual influences. The Vanilla Ace mix is ready for late-night club action, while the garage-feel of the Horsey Brother’s mix nestles perfectly in the tracklist and refreshes the palette in time for the 2nd Sequel mix to finish things off nicely. As the starting point for all these mixes, the title track is a worthy follow-up to ‘Wandering Bear’, leading Gooseneck Records into 2014 on a high note.

What sort of vibe were you going for and how did you go about achieving that?

What are your influences and where have they come from?

“I believe a combination of my influences is present in the music being produced and released on Gooseneck Records. Originally I was raised in and around the house scene of Buenos Aires, Argentina in the early 2000s, which had a lot of more deep and dark sounds. That then evolved into more Chicago and Detroit house sounds that are also present in this release. These have taken on a larger role in my music, since I’ve spent the past few years living in Chicago.”

What sort of things can we expect going forward from the label?

“We’re already planning a slightly new direction for Gooseneck in 2014. While remaining loyal to our current artist roster and sound, it’s aimed at more classic house and dancefloor-friendly tracks. Expect traditional 4/4 house tracks with old school Chicago influences and well-marked, bouncy basslines. Also, we are hoping to start getting into more event management and label showcases around South America, as the label is currently based out of Sao Paulo, Brazil.”