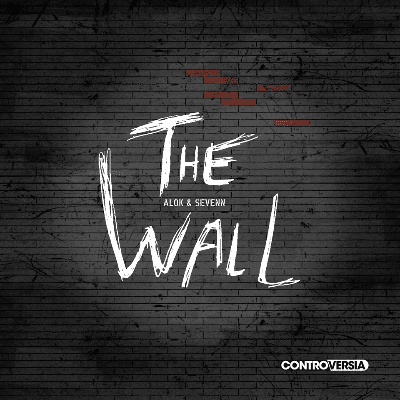 Alok has collaborated with American artist Sevenn on new single ‘The Wall’, the first release on the Brazilian bass innovator’s new CONTROVERSIA label, out on Friday 28th June.

Marking Alok’s ninth musical release of 2019, the track samples the iconic “We don’t need no education!” vocal from the Pink Floyd classic ‘Another Brick In The Wall’. Replacing the 1979 original’s operatic prog rock with a sizeable dosage of Alok’s trademark uncompromising bass sound, ‘The Wall’represents a high-octane first release for CONTROVERSIA, an imprint aiming to release underground electronic music with a particular focus on Brazilian bass and ethnic sounds.

“Releasing ‘The Wall’ as the first official music from my own label Controversia is arguably one of the most rewarding choices I could make.” Alok comments. “I’m constantly eager for music that leaves, somehow, a lasting impression on people’s lives and ‘Another Brick In The Wall’ is memorable for different generations. I’m so grateful for this opportunity and I’m sure there are a lot more to come. I’m passionate about the idea of helping others shine their own music and the goal of the label is to really strengthen people that I strongly believe in.”

It’s the second time Alok has collaborated with an artist of this stature, after remixing ‘Gotta Get A Grip’by Mick Jagger back in 2017. ‘The Wall’ has also been given an extra seal of authenticity after it was approved by Roger Waters himself, who rendered it an official rework of the original.

It is also set to receive an official animated video clip made by Steve Cutts, a London-based animator and illustrator who’s artwork satirises the excesses of modern society. His style is inspired by the cartoons of the 1930s and 1940s, as well as modern comic books and graphic novels. He works as an illustrator for London creative agency Glue Isobar, where he has worked on digital projects for companies including Coca-Cola, Google, Sony and Toyota.

Steve Cutts explains ‘As a fan of the original ‘The Wall’, it was an exciting opportunity to create a video to a new version of the track, particularly as the message from the original is as relevant today as it was when it was released almost 40 years ago. So in many ways it was a great chance to expand upon and continue that, and to become part of the songs ongoing legacy with Alok & Sevenn own progressive incarnation of the music.’

Crafting his unique sound for over 15 years, Alok continues to champion Brazilian bass at parties across the globe, becoming one of the most successful artists in dance music in the process. Officially the most listened to Brazilian artist worldwide, he recently reached the 1 billion streams mark on Spotify, further establishing himself as an artist with true global appeal.

Already halfway through the year, 2019 has already proven to be the revered producer’s most prolific year yet. Beginning the year at #13 on the DJ Mag Top 100 list, Alok again struck a chord with global hit ‘All The Lies’ – a collaboration with The Vamps and Felix Jaehn which has amassed over 37 million Spotify streams and counting. He has also teamed up with a number of instantly recognisable artists this year, including Steve Aoki on explosive track ‘Do It Again’ and Australian innovator Timmy Trumpet on ‘Metaphor’.

Meanwhile ‘Hear Me Now’, the track that first saw Alok gain global traction, is still the most played song from a Brazilian artist on Spotify with almost 400 million streams, ‘This is Alok’ is the biggest playlist on Spotify worldwide from a DJ artist and he is set to become the first ever Brazilian to play at three different stages at this year’s Tomorrowland.

Initially a duo made up of brothers Kevin and Sean Brauer, Sevenn burst onto the scene in 2017 with‘Boom’, an electro-house collaboration with Tiesto followed by a Gucci Mane remix amassing a combined 147 million Spotify streams. Now with Kevin as the sole member, Sevenn has more recently released music on the likes of Armada, Universal Music and SOURCE.

The first release on Alok’s newly-established label, ‘The Wall’ marks the latest chapter in the story of one of contemporary dance music’s most admired figures.