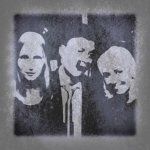 Hauswerks & Anëk : “The "Alter Egos EP" idea first came about when Hauswerks and Anek met each other playing at a VIVa Warriors party at Sankeys Ibiza last summer. After an amazing party and some Hierbas fuelled tom-foolery they ended up chatting and laughing for hours outside the club. They talked about everything from music productions to alter egos, and in general just clicked.

Karina and Denise let Hauswerks aka Colin in on a secret about their alter egos Liz (Karina – also known as French Liz) & Bønne (Denise – pronounced 'Bean'), and swiftly after Colin received an Alter Ego name of his own from the pair…..welcome – 'Les'

How these names came about, unfortunately they can't reveal!

A few months later Anek and Hauswerks decided to take their alter egos Liz, Les & Bønne to the studio and created the "Alter Egos" EP.  Which resulted in a very interesting combo of slick house grooves and good vibes!”

‘The Itch’ opens the EP with a captivating series of shuffling claps, interjecting whistles, vocal chops and raw stabs amalgamated to disclose an infectious, groove-led workout. Next up, ‘You Don’t Know’ opens with a low slung groove line that’s infectious from the get go, whilst a medley of organic percussion licks, distorted vocal lines and powerful kicks are aimed squarely at the dance floor.

Last up is ‘Alive’ which lays it’s focus on a swinging, bumpy groove fuelled by ever-evolving percussion changes, melodic break down’s and a vacillating feel from mesmeric to powerful which rounds off the EP in style.

The Itch
You Don’t Know
Alive