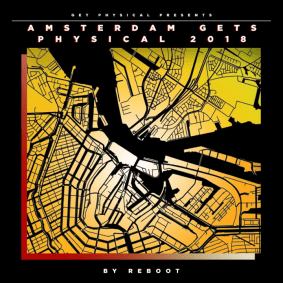 Acclaimed German DJ & producer Reboot takes the reins of the essential next Get Physical compilation, this time focusing on Amsterdam ahead of the famous conference.

Reboot’s innovative house & techno has landed on Get Physical since 2016 in the form of two EPs and one excellent full length offering. Before that he amassed a fine discography of expertly designed, infectious grooves on labels like Cadenza, Defected and Cocoon. In September he releases his next great four tracker, Endis, on the label, and this compilation features six of his superb originals with six of his trademark remixes making up the rest of the tracklist.

Things open up with Reboot’s ‘Krazkil’, a freaky tune filled with alien sounds scuttling over a rubbery drum line, then his remix of Spettro's ‘Get Tropical’ gets more percussive and tribal with its loose, tumbling toms, and three more remixes of Ramboiage, DJ T. and M.A.N.D.Y. sink into deep house, loopy jazz tinged grooves and scintillating, spaced out tech.

The perfectly balanced mid-section takes in originals ‘Paroxysm’ and ‘Rocbell’ which are wonderfully dreamy house tracks with gorgeously pensive pads, then remixes of Animal Trainer and Pezzner that strip things back to deep, cavernous grooves designed to get lost in. A closing and terrific trio of Reboot tunes keep things spine tinglingly deep and spacious, the last of which is laced with beautiful ambience and drifting spoken word vocals that leave your mind feeling utterly empty and soothed.

This is a fantastic mix that shows off Reboot’s expert knack for stripped back but atmospheric and all-consuming grooves.