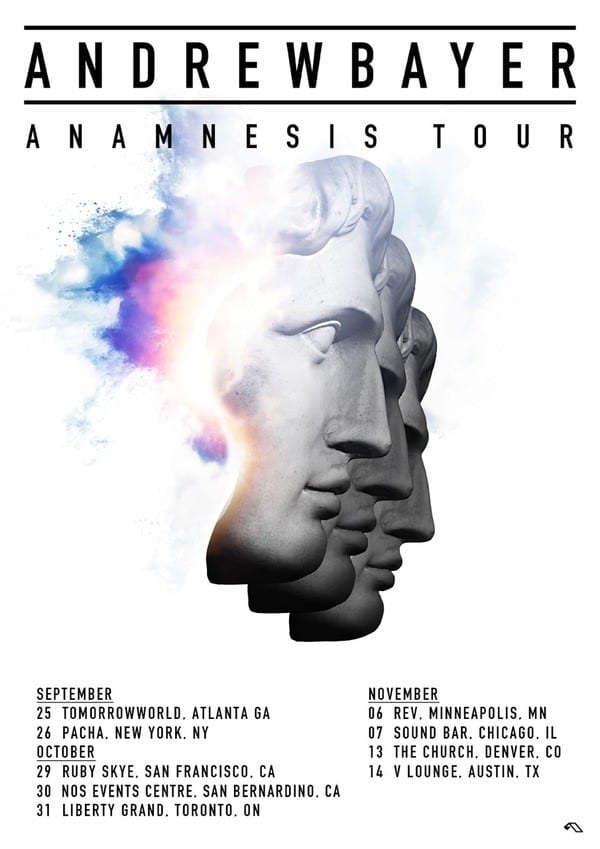 Following his experimental five-track ‘Do Androids Dream’ EP earlier in the year, Anjunabeats innovator Andrew Bayer returns with another bold, artistic concept in his ‘Anamnesis Trilogy’.

Releasing a track every month from October through the end of the year, Andrew Bayer’s ‘Anamnesis Trilogy’ is a return to the classics… reimagining past inspirations from trance and progressive’s golden eras and bringing them up to date with a 2015 twist in Bayer’s unique, inimitable style.

“The Anamnesis Trilogy is all about reviving, reinterpreting and reimagining what I feel are classic – and lost – messages and motifs in trance and progressive. In this EDM-era, big room music has become obsessed with high impact, instant gratification and, to be honest, absolutely uninspiring and boring arrangements. I was listening back over my favourite trance and progressive records, and remembering when dance music was about a sense of journey and progression. Records where there was more than just a breakdown and Bro-DM drops… records where you sometimes moved across what felt like three different – and equally mind-expanding – records just to get the REAL moment in the track. The three records in the Anamnesis Trilogy are all inspired by this sensibility and era, but 2015 Bayer style.” ~Andrew Bayer

The ‘Anamnesis Trilogy’ will be accompanied by an Anamnesis tour that reaches into North American territories that were left unexplored by his recent Do Androids Dream project.

The first release from the Anamnesis Trilogy, ‘Nobody Told Me’ will be released on Anjunabeats on Friday, October 2nd. Tickets are available here.