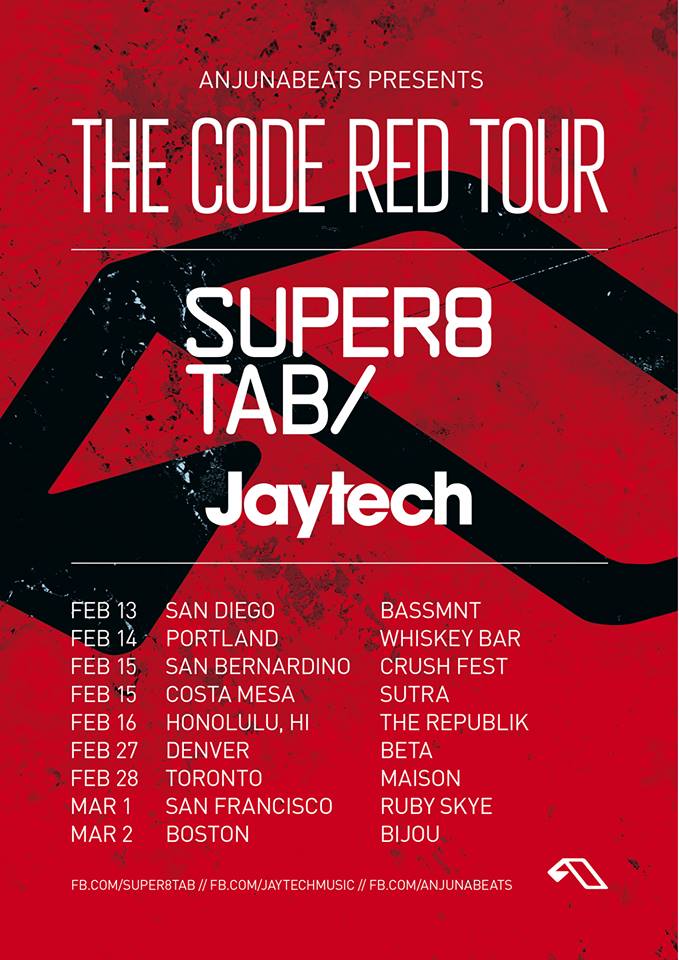 Finnish duo Super8 & Tab and Australian DJ/producer Jaytech are joining forces for the upcoming 9-stop North American Code Red Tour, kicking off on February 13 at Bassmnt in San Diego before heading to Portland, Boston, Denver, Toronto, Hawaii, San Francisco and more.
The minds behind classic tracks such as ‘Helsinki Scorchin’, ‘Suru’ and the acclaimed 2010 album ‘Empire,’ as well as recent club smashes like ‘L.A.’ and ‘The Way You Want,’ Anjunabeats artists Super8 & Tab have continued to release hits year after year. Cementing themselves as top producers in the trance world, the duo bring their energised sound to the biggest clubs in the USA – having recently celebrated 50 editions of their ‘SuperTab Radio’ podcast with a live broadcast at London’s legendary Ministry of Sound.

Jaytech, who currently resides in Germany, is the man behind two much loved albums in 2008’s breakthrough Anjunadeep classic ‘Everything Is OK’ and his energised ‘Multiverse’ on Anjunabeats in 2012. Having progressed his sound into more energised peak-time territory, Jaytech’s prodigious creativity has seen him establish himself as an Anjunabeats artist with tracks like ‘Inception’ and ‘Stranger.’ He also produces the much loved monthly mix show ‘Jaytech Music.’

Joining forces for this special tour, the duo will also be collaborating on studio projects for the future. Check out the tour dates below to see if they’ll be coming to a city near you!