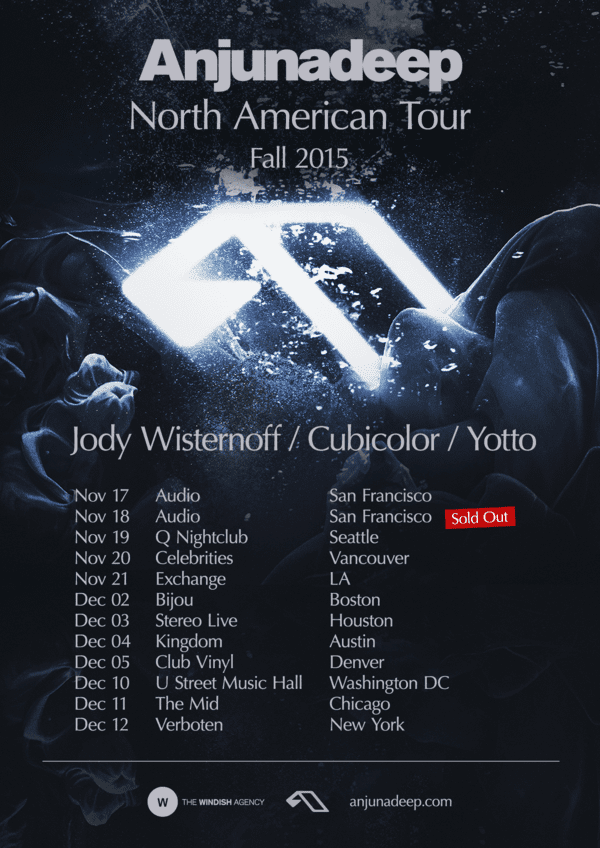 Now coming off three consecutive iTunes Dance #1 compilations with Anjunadeep 07, the label has announced the artist lineup for it’s biggest ever tour, returning to North America after a supremely memorable first go around this past winter. Covering eleven cities across Canada and the United States, the tour will showcase established label legends, in Jody Wisternoff and Cubicolor, and exciting new talent in young star, Yotto.

As an integral part of the past three Anjunadeep compilations, Jody Wisternoff has seen undeniable success as both a curator and producer. Most recently, his collaborations with label boss James Grant served as cornerstones on the chart-topping Anjunadeep 07. One of those collaborations, Solomon Grey – “Miradors” (Jody Wisternoff & James Grant Remix), is set to be released as a single on the label this week. Jody has also continued his career as one half of pioneering production duo Way Out West, who are currently working on their fifth studio album. Preview “Tuesday Maybe”, the first track off the album, here.

Anjunadeep mainstays Cubicolor have been busy in the studio as well, working on their debut album for release on Anjunadeep early next year. Their much-loved ‘Down The Wall’ EP picked up huge support this summer from A-list tastemakers like Joris Voorn, Sasha and Lee Burridge, and they are set to debut a raft of new music from the forthcoming LP.

Yotto, the latest addition to the Anjunadeep roster and label tour lineup, has been creating quite a buzz among fans and media alike. Recently taking over Billboard’s Guest Playlist, the Finnish producer saw his ‘Wondering’ EP climb to #3 on the Beatport Deep House chart, and followed it up with a brooding remix of Lane 8’s “Undercover”, championed on BBC Radio 1 by Pete Tong. Fast becoming a fan favorite, Yotto’s inclusion on the Anjunadeep Tour marks his North American performance debut.

All three artists will appear on every date for the tour, and most cities are close to selling out.