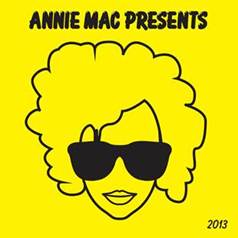 Annie Mac has revealed the tracklisting for one of the biggest releases in the electronic music calendar, her Annie Mac Presents compilation Album. The 2013 album is the 5th in the annual AMP series and will be released on the 14th October by Virgin/EMI Records in the UK and for the first time, in America and Australia. The album is packed with over two hours of Annie’s favourite tracks of the year, split over two contrasting mixes – the first mix offers up big dance tracks straight from the club, whilst the second mix is more mellow.

Last year’s installment of Annie Mac Presents topped the iTunes albums chart and 2013’s selection is set to be just as popular, bringing together an eclectic mix of established and emerging artists as well as featuring two specially commissioned tracks that have been personally selected by Annie from two exciting new artists – the talented Newcastle soul girl Lulu James and the much-hyped UK producer Route 94.

Mix 1 represents all of the tunes Annie has been playing out at clubs, parties and festivals over the year. The mix features some of the strongest releases from 2013 including ‘When a Fire Starts to Burn’ from Disclosure, Mercury nominee Rudimental’s ‘Waiting All Night’, Chase & Status’ ‘Lost & Not Found’ and Duke Dumont’s number 1 smash ‘Need U (100%). Other heavyweight tracks include Jessie Ware’s Bashmore-produced ‘Imagine It Was Us’, Breach’s club favourite ‘Jack’ and rising producer Mike Mago’s hit ‘The Show’, all firmly representing the resurgence of house music in 2013.
Mix 2 is a more laid-back listen, featuring some of Annie’s favourite soul and hip-hop tracks of the year including UK trio London Grammar’s ‘Hey You’, rated-producer Cyril Hahn’s single ‘Perfect Form’, Sam Smith’s ‘Safe With Me’, Miguel’s ‘Adorn’, Chris Malinchak’s soulful hit ‘So Good To Me’ and A$AP Rocky’s ‘Fashion Killa’.
As well as the release of the forthcoming compilation, 2013 has seen Annie taking her much-loved AMP brand on new adventures with stages at some of the UK’s most established festivals including the first ever AMP stage at London’s Lovebox, a return of the AMP arena at Creamfields, a one-off really special AMP party at a 2,500 year old fort in Ibiza with performances from Disclosure, Jessie Ware and Julio Bashmore, and a super fun AMP line-up on a giant boat at Bestival.

Next month will see AMP return to its London residency at KOKO on October 12th for the AMP compilation launch party. Joining Annie on the bill will be Rustie, Route 94 and SOPHIE. AMP will then hit the road in the autumn for the annual tour, which will be heading out to some of the biggest club venues across the UK and Dublin. The 8-date tour kicks off on 8th November at The Warehouse Project in Manchester and finishes on 30th November at the Academy in Dublin, with a first class line-up curated by Annie featuring live performances from: Duke Dumont feat. MNEK, Cyril Hahn and Lulu James as well as Annie herself.

Tickets for the tour and AMP @KOKO are on sale through www.anniemacpresents.com, where fans can win a signed copy of the AMP 2013 Compilation album and tickets to an AMP show of their choice.