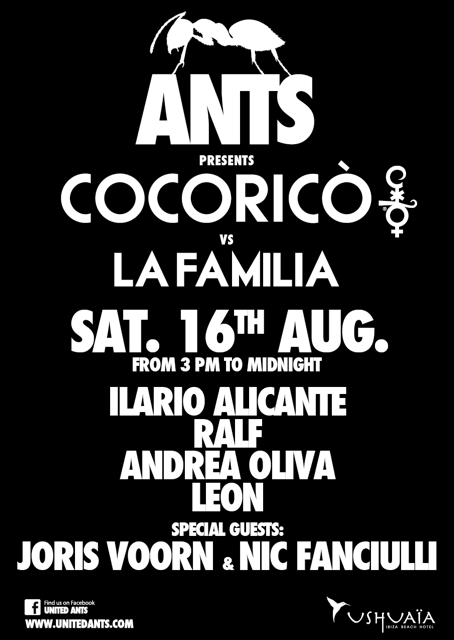 Showcasing some of the most respected artists in electronic music, La Familia kingpins Joris Voorn & Nic Fanciulli will go back-to-back for an explosive headline set, which will be the climax of each La Familia party, and the only place on the Island to catch the pair together this season.

Representing for ANTS will be chief resident Andrea Oliva, who joins the dots between the two camps having released his debut EP on Nic’s own label ‘Saved’ back in 2009. Since then, his rise to prominence has been blistering; spearheading ANTS over the past two years as it’s become one of the most talked about events in Ibiza. Andrea makes a return to Saved on August 18th with his remix of Livio & Roby and Fauvrelle’s ‘Shake That’.

Cocoon Heroes stalwart Ilario Alicante will also be bringing his hefty musical credentials to the party. Having made his record-breaking Time Warp debut at the tender age of 15 years old, Alicante already has a staggering ten years under his belt. Accrediting much of his success to maintaining firm roots in the clubbing lifestyle, his effortless connection with the dancefloor and unique production styles never fail to deliver.

Next up, Cocorico resident and a central figure behind Marco Carola’s ‘Music On’, LEON, will also make an appearance. As a long-standing friend of both Joris and Nic, his inclusion is reflective of the residency theme, and the close ties that have brought each artist together to take their place within this unique series of events.

Adding to Cocorico’s showcase are two artists from opposite ends of the spectrum – from the new generation of club residents, the fresh talents of ASAL will be making his ANTS debut, alongside seminal father of Italian club culture DJ Ralf, an artist who has seen the scene develop from it’s infancy back in 1987, right the way through to the present day. Taking place right after the Italian Ferragosto holiday on August 15th, this culmination of some of the world’s biggest brands and DJ’s at Ushuaia, should be one to remember.