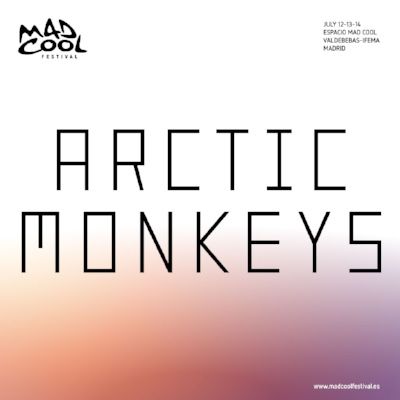 The UK’s biggest band have been added to the standout line-up of the Summer!

Their songs have been streamed over six billion times and with 5.5 million streams every day.

We’re very excited to announce the one-and-only Arctic Monkeys as headliners at Mad Cool Festival 2018, four years after their last visit to Spain.

Ever since releasing the fastest-selling debut album in British music history, Whatever People Say I am, That’s What I’m Not, the band – Alex Tuner(vocals, guitar), Matt Helders (drums), Jamie Cook (guitar) and Nick O'Malley (bass) have continued to climb higher and higher with each new album cementing their legendary status. Their last album, AM, debuted at number 1 in 10 countries around the globe and charted in the top 10 in 27 others: they are truly one of the biggest bands in the world, promising to bring swagger, authenticity and stadium filling tunes to Mad Cool.

Arctic Monkeys are the only band to have won both Best British Group and British Album of The Year at the Brits three times.  Other achievements include an Ivor Novello award, a Mercury Music Prize, 20 NME awards, five Q awards and three Grammy nominations.

Mad Cool already has “the year's best line-up”, according to Consequence of Sound; with other huge rock and indie acts such as Tame Impala, Jack White and Queens of the Stone Age already booked, the addition of Arctic Monkeys makes it impossible to disagree with them.