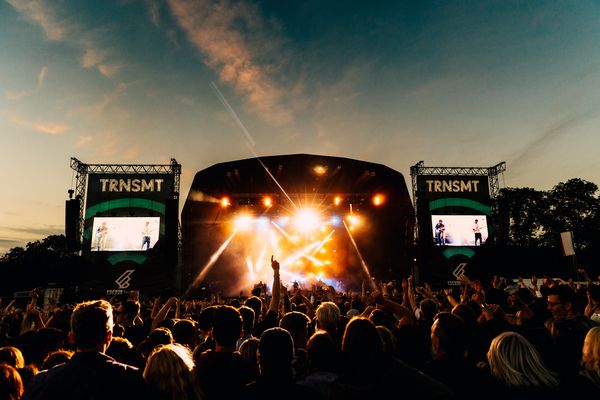 TRNSMT Festival are thrilled to announce Arctic Monkeys as the fourth headliners for the 2018 festival. Arctic Monkeys will bring their unrivalled sound to a headline slot in Glasgow on Sunday 1st July, closing the festival’s first weekend.

One of the most successful British bands to emerge in recent times with the fastest selling debut album of any British band in history, it’s been over three years since Arctic Monkeys last played in Scotland. Releasing their hugely successful fifth studio album AMalongside an extensive international tour, Arctic Monkeys made history as the first independent label band with five consecutive Number 1 albums in the UK. Other achievements include an Ivor Novello award, a Mercury Music Prize, 20 NME awards, 5 Q awards and 3 Grammy nominations. The much-loved band enjoyed their most successful touring period in support of AM, headlining over 100 shows and festivals around the world. With news of a new record looming, we’re sure the new songs will create those iconic festival singalongs, alongside anthems like ‘I Bet You Look Good on the Dancefloor’, ‘Brianstorm’ and ‘Do I Wanna Know’. TRNSMT are thrilled to welcome Arctic Monkeys to Glasgow Green this July.

Straight from New York City, Interpol take to the TRNSMT stage for the first ever time in 2018. Emerging from the post-punk revival of the 2000s, Interpol’s debut album brought them critical acclaim that never seemed to end and their highly-anticipated sixth album is due in 2018. Almost 15 years after its release, Interpol performed a series of shows revisiting the era-defining Turn on the Bright Lights, performing the album in full and delighting fans around the world. Interpol have made some of the most influential and important records of recent times and their enigmatic presence on stage means their set at TRNSMT will be long remembered.

Carving out a lead position in the canon of great British indie bands, Stockport’sBlossoms have earned rave critical comparisons to everyone from fellow TRNSMT act Arctic Monkeys to Depeche Mode to The Doors, playing sold out shows since their rocket to fame in 2016. Their debut self-titled record shot to the number one spot and was hailed for its infectious beats on ‘Charlemagne’ and ‘At Most A Kiss’, which they will bring back to the Green after a heralded debut at TRNSMT 2017.

Tom Ogden, Blossoms said: “We’re thrilled to be heading back to this year’s TRNSMT Festival. We had a proper blast last year. The Scottish really know how to throw a party and more importantly, a festival!”

English alt-rockers Nothing But Thieves join the 1st July line-up, after releasing their second album Broken Machine in September 2017 with critics labelling it one of the best rock albums of the year and finding the band fans in all corners of the world. The quintet has supported Muse, Biffy Clyro and Arcade Fire, firmly cementing themselves as an essential part of Britain’s music scene.

Set to make an exciting return to the TRNSMT Festival stage in 2018 is Declan McKenna. The eighteen-year-old has enjoyed a monstrous 18 months touring the world relentlessly with his infectious leftfield pop songs imbued with socially aware, pertinent lyricism including one of the songs of the past year, ‘Brazil’.

A man who is no stranger to fellow TRNSMT act Arctic Monkeys, Miles Kane will play TRNSMT’s Main Stage on Sunday 1st July, bringing his energetic set to Scottish soil. Having worked with Paul Weller, Mark Ronson and of course, Alex Turner, Miles Kane is one of his generation’s most established songwriters.

Miles Kane said: “It’s been too long since I’ve been on stage – I cannot wait to get up and perform a high energy set with a couple of new bangers thrown in! Bring it on!”
With 2018 bringing Tom Grennan’s debut album and biggest UK headline tour to date, an appearance at TRNSMT will be the cherry on the cake for the young performer. The 22-year-old’s latest single ‘Sober’ made Annie Mac’s Hottest Record in the World early this month, the singer-songwriter was named on BBC’s Sound of 2017 and Tom even made a guest appearance on Charli XCX’s hit video for ‘Boys’ in 2017. His debut on Glasgow Green will see him performing catchy, made for summer tunes like ‘Royal Highness’ and ‘Found What I’ve Been Looking For’.

A city already renowned for its captive music audiences, TRNSMT’s first year in 2017 showed artists from around the world that there’s nothing better than a Scottish crowd and 2018 promises to deliver an even stronger transmission. With Stereophonics, Liam Gallagher, Arctic Monkeys, and The Killers as headliners, there’s no doubt that Glasgow is the place to be for music fans next June and July. Mixing legends of the stage with the best up and coming talent from around the world, TRNSMT Festival will delight music fans across genres as fans experience acts like Courteeners, CHVRCHES, J Hus, Miles Kane and Gerry Cinnamon, making TRNSMT the perfect destination for festivalgoers this summer. Winning ‘Best New Festival’ at the UK Festival Awards,TRNSMT was heralded by fans and critics in its inaugural year for its incredible audience, atmosphere and perfect mix of international and local talent. With more artists to be announced, TRNSMT is already the ultimate festival line-up for music fans.

Geoff Ellis, Head of DF Concerts said: “DF Concerts are thrilled to bring TRNSMT fans Arctic Monkey’s as our opening weekend’s final headliners; we’ve wanted to have them back in Scotland for a while now and can’t wait to see what their set will bring. Sunday 1st July’s line-up is a combination of legends and bright young stars. We can assure fans TRNSMT 2018 will be unmissable. Stay tuned!”