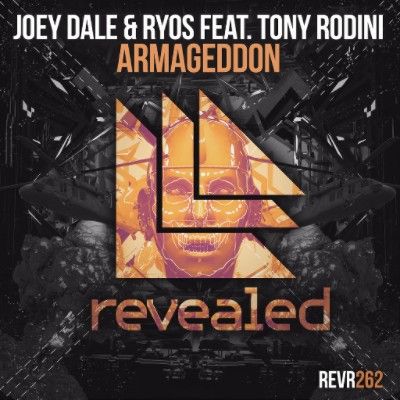 Joey Dale makes his triumphant return to Revealed Recordings with young hot shot producer Ryos alongside singer/songwriter Tony Rodini. Delivering an explosive radio anthem titled ‘Armageddon’, the track is set to make its mark on the scene in the coming months whilst becoming an excellent new addition to the Revealed club-dominating arsenal.

Fusing together the exceptional radio ready vocal cut from Tony Rodini alongside lively percussion rhythms and striking melodic riffs, ‘Armageddon’ is a dancefloor powerhouse track rife with all the elements for chart topping success.

With Joey being no stranger to the Revealed Recordings family and Ryos receiving support from industry titans such as Martin Garrix and label boss Hardwell, ‘Armageddon’ looks set to be another stand out moment in the promising careers of both artists, whilst providing a platform for highlighting the supreme talent behind Tony Rodini’s vocal work. Make sure to cop yours. Out now via Revealed Recordings!