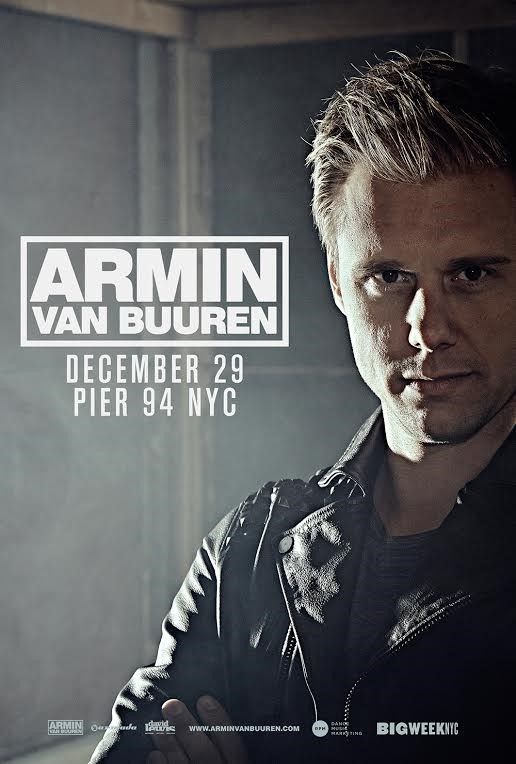 Today, Armin van Buuren along with RPM Presents announce they will be kicking off New Year’s week on Monday December 29 at Pier 94 in New York City.

This show comes on the tail of a record-breaking year for Armin van Buuren, a year capped by a GRAMMY® nomination for “Best Dance/Electronic Recording” and a Juno nomination for the hit single, “This Is What It Feels Like” featuring Trevor Guthrie. That song is certified Gold in the U.S. and also achieved Platinum, Gold and Silver status in countries around the world. Additionally, Armin earned eight International Dance Music Awards (IDMA) in the categories of: “Best Trance Track,” “Best Compilation or Full Length DJ Mix,” “Best Trance DJ,” “Best Podcast or Radio Mixshow DJ,” “Best Artist (Solo),” “Best Featured Vocalist Performance,” “Best Music Video” and “Best Producer.”

The leading DJ/producer of the trance genre, Armin van Buuren was voted “#1 DJ” in the world in DJ MAG’s annual “Top 100 DJs” poll, more than any other DJ in the magazine’s history. It is no doubt that Armin is one of the most influential figures in dance music with his weekly “A State Of Trance” (ASOT) radio show drawing upwards of 20 million listeners each week from around the world. With ASOT and his “Armin Only: Intense” shows, Armin van Buuren has the distinction of having sold-out Madison Square Garden not once, but twice.

For New Year’s week, the setting is Pier 94 in New York City. The venue is a 135,000-square-foot-warehouse on the Hudson River, converted into the city’s largest pop-up concert venue. The space features a custom audio and video system, art installations, a full cast of dancers and performers, VIP accommodations, and much more.